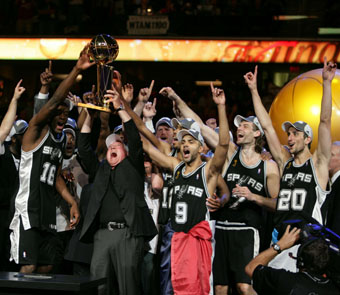 It is mid-October and nearing cold in Texas, a time when pigskin fever seems to envelope every corner and cornfield in the state.

But for the citizens of San Antonio, mid-October can mean only one thing: the return of their beloved Spurs.

Old couples adorn their automobiles with “Go Spurs Go” flags and small children drape Manu Ginobli gear as if there were nothing else sold in the stores.

In sum, it’s a time when the entire 210 stocks up for another march to the NBA title.

But when your team is the Spurs, the defending NBA champion and three-time title winner in the last five years Spurs, who could blame them?

That’s just how a dynasty works.

PF Tim Duncan returns for his 11th NBA season with 4 rings, three Finals MVPs, 2 season MVPs, and one statue just waiting to be erected outside the AT&T Center.

But if last year’s playoffs showed us anything, it’s that Duncan’s returning (and longstanding) supporting cast is every bit as enduring as the magisterial Duncan himself.

PG Tony Parker secured his first NBA Finals MVP award last year with a 24.5 ppg dissection in the Spurs’ sweep of the Cleveland Cavaliers, capping the effort with a 24 point, 7 rebound, 10-14 shooting clinic in the Game 4 final.

In addition to the Finals MVP and 20.8 point postseason scoring average, Parker notched his second consecutive season with at least 18 points and 5 assists per game—all not bad numbers for a Frenchman many said was too soft and not heady enough to cut it in the League.

Now Parker is beginning his 7th season at the helm of a Spurs 3 time championship offense that typically executes better than Robespierre’s guillotine.

SG Manu Ginobli shoulders the remainder of the offensive load for the Spurs, playing the 16.5 per game enigma to the incessant Duncan and the fully-ascended Parker.

But despite logging the least amount of minutes per game (27.5) since his rookie season, Ginobli’s 16 + point average was a career high, as was his team-leading average of 24.1 points per 40 minutes.

As Ginobli (30) and Parker (25) have improved their games every season, Duncan has remained the same unstoppable force–it’s silly to think any one of the three players will slack off this season.

The rest of the Spurs’ roster is comprised of an all-too-familiar contingent of willing and able role players.

Veterans Bruce Bowen, Michael Finley, and Brent Barry (35 combined seasons) return to serve as the core role-players for San Antonio. Each is unquestionably in the close of his career, but make no mistake: Bowen can still defend, Finley can still score (4th on the Spurs last season with 9.0 ppg off the bench), and Barry can still be “that veteran white guy.”

7-0 Francisco Elson and 6’11 Fabricio Oberto will again platoon at center to try to relieve pressure off of Duncan and his post-fixtures, with a little help from former Florida star Matt Bonner.

4th year G Beno Udrih and veteran Jacque Vaughn are back to tandem as reserve backcourt mates, but the two figure to be pushed for playing time by rookie guards Keith Langford (Kansas) and Darius Washington (Memphis).

Another rookie slated for a possible impact is 6-11 F/C Kris Lang from North Carolina, who offers greater interior athleticism than the rigid bodies of Elson and Oberto.

While the Spurs did get arguably much more athletic with their above mentioned draft picks, the name of the game in San Antonio is veteran playoff experience; it’s what brings the banners to the top of the arena.

No one exemplifies the fruits of that precious trait more than the oldest player on the Spurs roster.

Even in last season’s playoffs in which (aside from one trey-ball in Denver) Horry couldn’t throw it in the San Antonio river if he was standing on the Riverwalk, Horry’s “big shots” proved to be the difference in the playoffs once again.

Suns fans may not appreciate the pun, but they will certainly agree with the following statement: Horry’s “shot” in Game 5 of last year’s Western Conference Semi-finals that sent Steve Nash sprawling onto the hardwood (and Amare Stoudemire and Boris Diaw out of the series) eventually won the NBA Championship for the Spurs.

But while Horry’s series-changing body-check initiated a firestorm of speculation and controversy that will probably never cease in Phoenix, it served as a poignant reminder of why the Spurs remain the favorite to win the NBA championship each and every year.

More so than any other team in the NBA, the Spurs are built for the postseason.

They control the tempo. They execute in the half-court. They play superior defense.

And if they have to bash the brains of your 2-time MVP point-guard clear across Bexar county, then they will do that, too.

But despite winning three championships in five seasons, the Silver-and-Black has never gone back-to-back, defeating the Nets in 2003, the Pistons in 2005, and the Cavaliers last year—a repeat could be all that’s left between the Spurs and a full-fledged dynasty.

The toughest obstacles to that repeat this season need no introduction to San Antonio fans.

Directly up I-35 lurks a Dallas Mavericks team (and owner) desperate for an NBA championship and loaded with all the pieces this year to finally secure the hardware.

Due west awaits an unstoppable (and aforementioned) Phoenix Suns squad, led by an angry MVP point guard with a Horry-sized chip on his shoulder.

But regardless of who holds the gold when the dust settles in the West, one fact of the travel is for certain: the road to NBA riches runs through San Antonio.

It’s the same ole’ Spurs team this year, as always.

But can you really bet against ‘em?