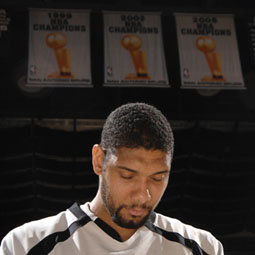 Although I have already expounded on the Western Conference playoffs in their entirety, I will take a few moments to look a little closer at the 3v.6 match-up of the San Antonio Spurs and the Denver Nuggets. This series is starting to gain steam as the one that might go the distance. The Nuggets are rounding into form at the right time and the Spurs are like your favorite sneaks. You can always count on them; good “old reliable.”

If you have already read the above link, then you know that I have picked the Spurs to win in 6. It would have been easy for me to pick the Nugs, but rational though made it too tough to justify. Two years ago, the same teams met in the first round, with the Nugs stealing game 1 in San Antonio (Andre Miller blew up), before the Spurs ran off four straight. This Nuggets team is much different from that one, which as you may recall went into that postseason on the heels of a 32-8 finish to the season. The main difference to be found is in the backcourt. Gone are Andre and Earl Boykins, in their place are Steve Blake, JR Smith, and this guy named, Allen Iverson. The Nuggets also finally have a healthy Maybyner Hilario to score in the paint and give Marcus Camby some help on the backboards.

The Spurs are basically the same team with a few support pieces added to the Big Three of Tim Duncan, Manu Ginobili, and Tony Parker. Francisco Elson and Fabricio Oberto have taken on the “Nazr/Rasho” role in the middle, with Michael Finley and Brent Barry backing up the guards. (I know the start Barry a lot.)

Individual match-ups may make the biggest difference in this series, which raises several questions.

Can the Nuggets keep Parker out of the paint? Does AI check him, or do they tag-team him with Blake and JR? Will Bruce Bowen be continually allowed to Greco-Roman-defend Melo? Can Camby and Nene stay out of foul trouble?

The latter of these inquires might be the most important, as the Nugs are little thin up front, boasting only Eduardo Najera to provide support/fouls. I would assume George Karl would put Nene on Duncan, allowing Camby to roam away from Elson or Oberto, helping out from the weak-side. Camby is a solid Defensive Player of the Year candidate, but like Mount Mutombo, he is by no means the best “on-ball” defender. The one other option possibly at Karl’s disposal is the 2nd-year, do-it-all, Linas Kleiza (Please national media, learn how to say his name. I have heard it “chop shopped” a number of times in the last few weeks.) At 6-8, 250, Kleiza can play down low and guard a big man in a pinch, but the Lithuanian native is becoming more and more comfortable on the perimeter. If he, Smith, Blake, and Melo can hit a decent mark from behind the arc, this series stands to be much closer than I have prognosticated. (I haven’t seen a good 3-point shooting group from Denver since the days they were hanging those gigantic 3’s during Michael Adams’ consecutive steak in the late 80s.)

Winners of three ‘chips in the last decade, the Spurs are annually playing ball into the summer months. Timmy does seem a tad slower, but his numbers were again around the 20 and 10 mark. Oddly enough, those are down slightly from his career marks of 22 and 12. This being said, the Spurs still have the ability to make the game go the way that they desire. It’s one of the most subtle things in the world of sports to watch, but far from subtle to endure, physically.

Here’s how they usually go: The game seems no different than any other, with Parker running the show, the game almost has a fast-pace feel to it. Then towards the end of the 3rd quarter, the game is still just in the 60s and the Spurs are up about a dozen. Final score in the 80s. It’s not the prettiest thing to watch, as most would prefer the visually stimulating offensive ballet of the Suns. The public has also spoken with the below-average TV ratings for series involving San Antonio. While worshiped and adored in their home town, the Spurs are far from the “popular kid” worldwide.

Here’s how I see this series playing out. The Nuggets won a franchise-best 22 games away from the Pepsi Center this year, so I see them stealing one of the two played in the River City. On the flip side, the Nuggets surprisingly have not been the best home team, which should lead to another split. At the 2-2 point is where the Spurs’ experience should pay off the most. The Spurs will win the next two games (one at home, one on the road) and take the series in 6.

I just don’t think the Nuggets are ready to make a serious push for a title. Yes, a title. I know I am only talking about a first-round series right now, but next year bodes extremely well for Denver regardless of what happens in this postseason. Having to face the Spurs in the first-round this year is brutal, but thus is life in the Western Conference, where no one team stands a great chance of making it to the Finals; attrition my friends, attrition.