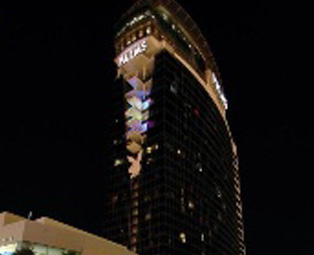 I’m not sure I should even be doing this. I’m working on a combined 150 minutes of sleep over the last two days. I hate lights, fresh air, water, fruits and vegetables. All-Star Weekend in Vegas is turning out to be both remarkable and outrageous. I’ll do my best to catch you up on Saturday night’s doings.

After the Dunk Contest, the SLAM Crew heaed back to our hotel, where we parted ways with Khalid (he was on some secret mission). Ben, Sam and I dropped off our bags, changed into some presentable clothes and rolled out to the Venetian Hotel and Casino for the Steve Nash/GQ party.

The Venetian is loosly based on the city of Venice, Italy, although this is a very loose interpretation. For instance, instead of dozens of canals running in between ancient crumbling buildings, the Venetian has one canal that runs through a mall. They have gondola rides available, and gondoliers wearing white and black striped shirts. Also, nobody was riding the gondolas.

A bunch of people were in a loose mass in a random corner. We investigated and discovered they were all hoping to get a glimpse of Jay-Z, who I guess was hanging out under a stairwell or something.

We finally found the V Bar, which was hosting the shindig. When we arrived it wasn’t very full, but we did see Matt Bonner and Pat Garrity standing around outside; we assumed they were looking for the white player’s party. They never did come into Nash’s party, but before long Nash arrived and then Kevin Garnett showed up with a crew that included Rashad McCants and Jawad Williams.

Nash and KG each had VIP areas set aside for them, but neither of them hid in their areas, instead moving freely around the small club, shaking hands and just acting like regular people. Andrea Bargnani also showed up, along with Darrick Martin, representing Canada and Raptors.

A DJ was playing some great old school hip-hop, from Brand Nubian to Poor Righteous Teachers, and before long KG could help himself: The Big Ticket staked out a spot right in front of the DJ table and started dancing, mouthing along to every lyric. An hour later, KG finally took a seat, drenched with sweat. Soon after, KG headed out, and by 1:30 we were gone, too. Nash was still there when we left, making the rounds, having fun.

We took the monorail back to our hotel and arrived by 2:00 a.m. Ben headed out to meet a buddy at the poker tables, and Sam and I were thinking about getting seats at a blackjack table when a friend from adidas (holler KW!) sent me this text message:
Palms. Playboy Tower. Goooood. Shaq here. Wanna come thru?

This posed a serious problem. Should we play blackjack for an hour then get some much-needed sleep? Or should we do Vegas things and hit the Palms and get no sleep?

Minutes later, we were in a mile-long cab line outside our hotel. As we waited, we saw a guy bring out a huge, clear bucket filled with what appeared to be orange juice. The guy then produced three bottles of champagne and poured them into the bucket, creating an industrial sized Mimosa. And inexplicibly, women were drinking from it. Yuck.

After a 45-minute wait, we got into a cab with a driver who was eerily reminiscent of Buffalo Bill from The Silence of the Lambs. While Sam and I tried to concentrate of not being abducted, the driver went through some back roads and a parking lot and suddenly we were at the Palms.

Inside the Palms we bumped into Mark Jackson, who sent his love to the entire SLAM family. After a while wandering around, we found the entrance to the Playboy Towers and the club, which I think was called Moon, although don’t quote me on that. We were allegedly on “the list,” but when I squeezed my way to the front of the line and asked for the person with “the list,” I was told she was gone and to please move along. OK. I got on the phone, and minutes later our people came down from upstairs. After some wrangling, we were in.

After a quick elevator ride, we emerged into a Bret Easton Ellis novel. Lights were flashing. Women were dancing on furniture. We were invited up into a private area. Sam wandered off. I was escorted across the dance floor (where Mark Cuban was getting down) and out onto a huge open rooftop deck 50-something stories above the Vegas strip. It was nothing short of amazing, even moreso because it was like 4 in the morning and we were in Vegas and all of a sudden, we were singing “Baaaaaal-ling!” The whole thing redefined excess. And it was awesome.

A little over two hours later, after another hour-long wait for a cab, we walked back into our hotel. The clock ticked past 6:00 a.m. The sun was starting to rise, and people were stumbling around all over the place, coming home from long nights out on the town blowing off steam.

Got in the elevator and some dude muttered, “Man, I wish I could just click my heels and be back home.”

Understood. My throat was dry. My eyes were red. My voice was gone. I had to pee. I had to sleep.

But I had to be at the Mandalay Bay Hotel and Casino in less than four hours for breakfast with David Stern. (Those notes are coming soon.)

And it don’t stop…