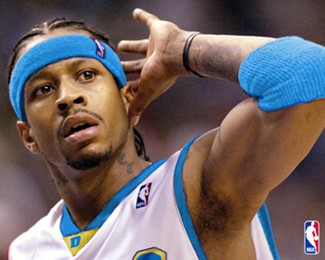 It’s been a weird couple of weeks there’s no doubt about that. Waiting and hoping we didn’t get screwed in the deal. There was one rumor about him going to Portland and the Sixers getting back Jamal Magloire to which my first response was a 2-minute cursing escapade. That would have been a deal-breaker, I’m not joking. I’ve been a Sixers fan for 20 years but had we gotten that crummy of a deal I would have thrown in the towel. I’m good with Miller and the draft picks even if we don’t know how high the picks are going to be. Dallas and Denver both will likely finish with very good records so its very likely we’ll pick somewhere in the 20’s. And even if we don’t get the number 1 (PLEASE!) as long as we’re top 3 I’ll live. If we end up with the number 9 then this thing is for naught.

Its going to be off the charts weird seeing AI in that powder blue nonsense, watching Denver fans basking in what was once our (my!) glory. AI has been the most popular player in the League for years now but its different when that guy plays for your squad. There is a sense of accomplishment that radiates from him playing well and the team winning games that you can physically take with you. I’m serious. As soon as people find out that the Sixers are my team they always slightly shake their head in a sign of respect. Even if the team wasn’t playing great people look at you with a bit of jealousy. Its like they know that he’s just one player and they have their own team they support but they can’t resist the temptation to dream of what its like to root for AI. The talent level incredible but the presence even more so. People who don’t even watch basketball know about AI. My moms, who likens sports to watching leaves fall, is an AI fan. Little kids who can’t dribble yet know, intellectual types who consider the NBA to be a low-brow engagement know who AI is, people from other countries who have never seen an NBA game know who AI is. And that’s a great feeling for us fans.

Even his myriad of haters didn’t bother me. Because for me hatred of AI became shorthand on whether you were the type of person who I could respect. Oh you think AI is a thug? Then you’re an asshole for not understanding (overstanding) his complexities. Oh you think he has too many tattoos? Cool, now I see how hypocritical and shortsighted you are. Oh you hate his cornrows because he looks thuggish? Awesome, now I see right through your subliminal racism you patronizing prick. My first article about AI appeared in issue number 68, in that I go into more detail about why he gets so much appreciation by the fans. Is he a perfect person, of course not. Is he the ideal franchise player? No, probably not. But was he perfect for these times? And did he do more for Sixer fans than anyone else? And did he, by refusing to bow down to the establishment, make himself an iconic figure that people relate to? And did he play his ass off every game and get respect from everybody? (Nobody ever challenged AI to a fight. NOBODY) Yes, no doubt.

I mean so now what? We just wait until June right? That seems to be the consensus silver lining that Sixer fans are supposed to adopt. Well cool and hopefully we get Oden or Durant and get this thing going in the right direction again. But rest assure things will never be the same. The end of era indeed.