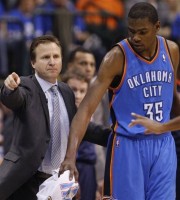 Depending on the situation each particular team is facing, it’s not entirely uncommon for NBA coaches to occasionally sit out key players.

Some do it for strategic reasons, such as ensuring rest and health for a Playoff push (ie. Gregg Popovich with Tim Duncan, Erik Spoelstra with Dwayne Wade); others are simply tanking games and looking forward to the Draft.

According to OKC Thunder head coach Scott Brooks, regardless of the motivation for teams making players sit out games, the act in and of itself is wrong.

With 10 games left in the regular season, Thunder coach Scott Brooks has no plans on resting any of his players in an attempt to enter the postseason rested and working with a clean bill of health. […] Brooks has never subscribed to sitting players. He has likened the strategy to “cheating the game” and the fans. And on Sunday, he confessed that his team’s youth plays a part as well.

“If we had a bunch of veteran guys in their 30s, there’s no question things would be different,” Brooks said. “But our guys, if you take out some of the guys, they’ll think I’m benching them twice a game. They want to play every minute. They love to play and they want to keep playing. It’s like pulling teeth to get five or six minutes out of them per half.”[…] “I always focus on the game and not focus on the minutes,” Brooks said. “I always believe that guys can muster up enough energy to win an NBA game (even if) it’s a back-to-back. If the guys need to play 40 minutes, they have to play it … I’m not worried about the minutes. I’m worried about how we play and how we can get better the last two weeks.”

To Scott Brooks’ credit, he fully admits that his squad’s youth allows him to avoid “cheating” the game and the paying fans. Brooks can afford to push his guys to the limit in terms of playing time.

Resting players is and will always be a part of the NBA game, and though some people may not like it, for certain teams the strategy makes a lot of sense.