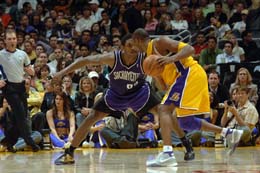 Some people base their arguments on statistics, some people compare the supporting casts surrounding each player and other people offer vague generalizations about selfishness, killer instinct and other qualities that are very hard to quantify in a meaningful way.

I compare players—not just Bryant and James, but all players—by skill set. Statistics can be affected by a player’s position, his role on the team and other factors; the numbers are important to consider but they don’t tell the whole story.

For instance, according to BasketballReference.com in NBA/ABA history 24 different players have had a total of 61 seasons in which they averaged at least 20 ppg and eight apg. Not surprisingly, Oscar Robertson leads that group with 10 such seasons, but do you know who has the second most 20-8 seasons?

I hope we can all agree that Marbury is not an all-time great point guard just because he put up some gaudy scoring and assist totals.

Let’s compare the respective skill sets of Bryant and James:

Bryant is a much better free throw shooter than James (.839 to .728) and Bryant has a better

jump shot from both the midrange and three point areas. Shooting is James’ biggest weakness but despite his much publicized work to improve his touch he actually has regressed during his career: his free throw percentage declined for three straight seasons, from .754 as a rookie to .698 in 2006-07, before bouncing back slightly to .712 last season.

Against many NBA teams James overcomes this with his sheer athletic power, bulling his way to the hoop to score in the paint (that is why his overall field goal percentage is higher than Bryant’s, much like Shaquille O’Neal’s field goal percentage is higher than Hakeem Olajuwon’s even though Olajuwon had greater shooting range). However, in each of the last two seasons when James went up against the eventual NBA champions those teams built a wall around the paint, sagged off of James and dared him to make jump shots.

Note that James’ turnover numbers skyrocketed because defenders could simply sit in the passing lanes. Opposing defenders are also more apt to foul James because James is not a reliable free throw shooter.

James is a small forward who is nearly as big as Karl Malone was, so he naturally shoulders a bigger rebounding burden than Bryant, a shooting

Of course, sometimes they guard each other and near the end of Cleveland’s 94-90 win over the Lakers, Bryant did a remarkable thing: he beat James to an offensive rebound after an Andrew Bynum miss, giving the Lakers a crucial late game possession.

After the game, someone asked Bryant how he did that but he just laughed and said, “I’m not giving up my secret. I told him (James) I was going to get it. That’s just years of experience.”

Yes, that was just one play but Bryant does that kind of thing fairly often; he knows all of the angles, his footwork is impeccable and he does not shy away from contact. When Andrew Bynum was out of the lineup and before the Lakers acquired Pau Gasol, Bryant averaged 10.4 rpg in a five game stretch without a decrease in his scoring or assists averages.

Keep in mind that the voting in this category is done by NBA head coaches (who cannot choose their own players), not media members. I often hear

fans criticizing Bryant’s defense but NBA head coaches have consistently recognized him as a top defender. Bryant has the ability to play lock down, denial defense against any shooting guard in the league but the realities of an 82 game schedule during which he also is asked to score 30-plus ppg mean that he does not play lock down defense on a nightly basis; however, that does not mean that he is playing poor defense the rest of the time.

Bryant understands what the opposing team is trying to do and he is very disruptive not only to his own man but also as a help defender. During the NBA Finals, Boston Coach Doc Rivers made an observation that did not get nearly as much play as it should have, namely that Bryant is the best help defender the league has seen since Scottie Pippen.

When James first came into the NBA he did not understand the finer points of NBA defense but he has been an avid student and quick learner at that end of the court. Cleveland Coach Mike Brown has a defense-first philosophy and James has bought into that completely, which inevitably leads to the rest of the team falling in line behind him.

Even when James makes an incorrect read he can often make up for it due to his incredible athletic ability. At the rate that James is improving it is only a matter of time until he will merit recognition as an All-Defensive Team player, possibly as soon as next season.

Many people simply look at career apg averages (6.6 for James, 4.6 for Bryant) and award this category to James in a landslide—but it is not that simple, as the Robertson/Marbury example indicates. As I noted during the Spurs-Hornets series, the assist may be the most subjective statistic in the boxscore.

That is one reason that the Cavaliers also track “hockey assists,” the pass that leads to a scoring pass (James gets plenty of those, too). Although I cite assist numbers when I write game recaps because those totals give a “quick and dirty” idea of who is doing the playmaking, when I compare the passing abilities of two players I consider the following factors: court vision/ability to read the defense, ability to make all of the fundamental passes, willingness to pass.

James has remarkable court vision but Bryant is a lot better in this regard than some people may think. It was not easy for him to display this when Kwame Brown was the recipient of his passes but when Andrew Bynum stepped up last season and especially after Pau Gasol arrived Bryant demonstrated that he can run the pick and roll and deliver a pass as well as the best point guards in the NBA.

James has a unique pass in his repertoire that few if any other NBA players deliver on a consistent basis: the crosscourt, bullet skip pass that punishes a trapping defense by finding the open man like a heat seeking missile. Bryant is capable of making this pass and he does so at times but James does this several times a game. The point is not whether or not this results in an assist but rather that defenses have to take this into account. James’ poor shooting takes away some options from him but his crosscourt passes give the defense something to worry about if their rotations are not crisp.

In terms of bounce passes, chest passes, outlet passes, no look passes and various kinds of feeds off of pick and roll plays, Bryant and James each have the full repertoire.

Hypothetically, if both players were placed on the court in a situation that was truly a 50-50 read—meaning that the player could justifiably either shoot the ball or make a pass—I agree with the subjective evaluation that Bryant may be more of a “shoot first” player than James is. However, the reality is that both players are expected to lead their teams in scoring while also being the primary playmaker. Their assist totals reflect the areas on the court where they receive the ball and the kinds of passes that they make in their respective offenses.

Bryant has arguably the best footwork in the NBA and this is no small matter: his ability to pivot, his use of the jab step and his cutting/ability to use screens are great assets offensively, while his footwork defensively is equally outstanding. Michael Jordan increasingly relied on footwork as he got older and you can already see Bryant going down that same path, even though Bryant still retains a lot of athletic ability at this point.

People get mesmerized by Bryant’s shotmaking but they don’t pay attention to the finer points of how he consistently gets open against the NBA’s best defenses, the subtle fakes and moves that Bryant uses to throw defenders off balance. Bryant can score in the post against bigger or smaller defenders because his footwork is so good and he is almost impossible to guard facing the basket for the same reason.

At this stage, James’ footwork is much more rudimentary.

He uses some jab steps but basically he simply gets by people with brute force and stunning speed. There is nothing wrong with that but those tools don’t work in every situation. James is also not nearly the postup offensive threat that he should be considering his size and athletic gifts. He is capable of getting in a defensive stance and sliding his feet but sometimes he plays a bit too upright, relying on his athletic ability to bail him out if he gets beat.

Bryant and James are both excellent ballhandlers. They each prefer their right hand but are able to dribble and finish in traffic with their left hand if necessary. James is a bit more apt to try a risky pass that could be stolen, while Bryant is more apt to lose the ball in traffic when he drives to the hoop. Bryant’s ballhandling style relies on finesse and precision, while James takes full advantage of his size and strength to overpower his defenders and get into the lane.

There is not a huge gulf between Bryant and James at this point. It seems that most of the people who believe that James is already better than Bryant fall into two camps: fans who are speaking from the heart more than the mind and stat heads who strictly look at (certain) numbers without considering any context. If you talk to NBA executives, coaches, players and scouts their evaluation will generally resemble the one that was offered above; it may differ in certain specific details but people who look at the game from a technical, objective standpoint realize that Bryant’s skill set is more well rounded than James’ skill set at this point. James’ size and athletic ability mitigate those skill set factors to some extent, so one could make a case that James is better than Bryant in that sense but I’d have to see an improvement in James’ shooting and/or a greater decline in Bryant’s athletic ability to agree with that take.