Seattle Trying to Bring Back an NBA Team 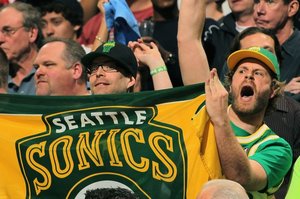 The city of Seattle has never recovered from losing their beloved Sonics in 2008. Since the team was highjacked and taken to Oklahoma City, there’s been scant talk about bringing a team back, but nothing truly substantive took root. Until now.

The Seattle Times unearthed revealing documents that show a serious effort to start up a new NBA team in the city, with plans to build a new stadium very soon:

A wealthy San Francisco hedge-fund manager and officials in the Seattle mayor’s office have been working behind the scenes for eight months to bring an NBA team back to the city as early as next fall and build a new arena, according to emails and documents that reveal a far more concerted effort than previously known. A Dec. 13 agenda for a meeting between the parties shows they were talking about details such as a “Review of Basic Deal Structure,” “Financing Issues,” including “City Debt Capacity,” and “Security for Public Financing.”

The documents, released Friday to The Seattle Times under a public-disclosure request, also provide the first glimpse of how the largely unknown hedge-fund manager, 44-year-old Seattle native Christopher Hansen, approached the city about his desire to buy an NBA team and build an arena south of Safeco Field. In an initial email laying out his vision, Hansen told city officials an arena could be built with minimal impact on taxpayers.

According to the published report, there’s talk of possibly relocating the Sacramento Kings to Seattle.

This is all obviously very early stages. But there are some encouraging signs here for passionate NBA fans in the Seattle area.