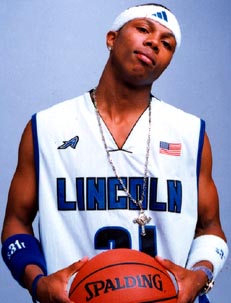 Right now I’m not sure exactly what to think about Sebastian Telfair, the player or the person.

By now you know the latest: Bassy was caught ridin’ dirty with a gun in his car. It’s his second gun incident in two years, and the Celts have announced they’re done with him.

Back in 2005, we were working on SLAM issue 95, and we wanted to do an issue with a lot of the best young players in the NBA. From there we decided to make it almost a theme issue, and we called it “The Come-Up Issue.”

A few weeks before that, I’d started noticing the play of Sebastian Telfair. Bassy was entering his second season with the Blazers, and right out of the gate he’d posted some great games. Against Orlando he went for 20 points and 8 assists with no turnovers in 35 minutes. In the Garden against the Knicks, Bassy finished with 27, 7 and 6.

So when the Come-Up theme was decided upon, we added Bassy to the line-up. And then we figured, Ah, what the hell, let’s put him on the cover. He’d already shared a cover with LeBron a few years earlier, and if this was the Come-Up Issue, who better to represent that generation of developing stars than Bassy?

When it came time to assign a writer to the story, I wanted to write this one. I was at that game at the Garden, watching Bassy play that night, so free and loose and electric, just taking it right at Stephon. It was obvious to me that Sebastian Telfair was going to be a great NBA player for years to come. I was as certain of this as I am that the sky will be blue tomorrow. There are times you see things and you immediately understand a central truth about them. When I saw Bassy, I knew he was going to be a star.

I was going home to Atlanta for Thanksgiving while the Blazers were going to be in town. We called the Blazers and set up a time, then realized we didn’t have anywhere to do the photo shoot. The Blazers were staying at a Four Seasons, and when we called to see about renting out a ballroom, they quoted us a price so astronomical that the ballroom should have come with a harem.

The morning of the shoot, I was supposed to pick up Sebastian Telfair and drive him a few miles away to Philips Arena, where we’d found a spare room in which to do our photo shoot. NBA players are often characterized as enjoying flashy, expensive rides, but Bassy didn’t bat an eye when I rolled up in my Dad’s blue Mercury. I was only in town for a few days, and I didn’t want to bother with renting a car, so my Dad was letting me borrow it to drive around an NBA player. The car isn’t messy, but it is a little old, with an interior light that goes on and off of its own accord.

Bassy and a Blazers p.r. staffer hopped in my chariot and we set of for Philips. It was early in the morning and a little cool, yet Bassy was dressed as if we were at the North Pole. He’d also just strained both groin muscles, so he was walking around with his legs kind of bowed out, like he had just climbed off a horse. I was listening to the local hip-hop station on the radio, and Jeezy’s “Trap Star” came on. Without saying a word, Bassy reached over and turned it up, not too loud, but just loud enough.

After we shot photos for a while, Bassy and I sat down and did the interview. I felt I knew him pretty well—I’d seen the Through The Fire documentary, had met Bassy a few times before, had been to Coney Island with Stephon, had followed Bassy’s high school career through the New York papers.

I started by asking him what it was like for him to grow up on Coney Island.

“People get Coney Island confused,” Bassy said. “Things happen, and there’s a possibility of anything happening, but man, Coney Island is a place of love. I go back there all the time. All summer I’m in the middle of the projects walking in and out of the buildings, and everybody showed me love. Even with a quarter of a million dollars worth of jewelry on, nobody touched me, nothing.”

Why didn’t anyone mess with you?

“For me to do well, it reflects on them. It’s their bragging rights, it shows that one of us is on the top. That’s why they protect me and they support me.”

Of course, about a year after Sebastian said that, he had a chain snatched from around his neck outside a restaurant here in Manhattan.

“Coming from the projects,” Sebastian was telling me, “coming from Coney Island, our opportunities is low. There’s not too many role models that come from the projects. And when you’re growing up as a young child, before you know that you can go to school and make something out of yourself, you got so many negatives already put toward you, because everything you see is going to be negative and bad. It can kind of steer you the wrong way. The thing with basketball is, no matter how poor you are, whatever, someone will always have a basketball and there’ll always be a hoop and a basketball. That’s one of our strongest opportunities.”

I asked him if he knew people from Coney Island who gone on to do bigger things.

“I know many people who made it out of Coney Island who became things, like teachers. One of my brothers is a teacher. My coach who coached me at Lincoln, Tiny, is a teacher, and he’s a huge role model. But I don’t know no doctors, I don’t know no lawyers.”

I asked him about the rumor that adidas had put him in Portland.

“I hate that rumor,” he said, looking genuinely upset to even talk about it. “Man, all that work I put in for somebody to take that from me by saying adidas put me in Portland? I mean, if adidas had power like that I think they’d be frying bigger fish than Sebastian Telfair to tell you the truth. That’s just people right there trying to take my work away.”

I asked him what it was like to have people trying to take his work away, having detractors.

When we finished the interview, we got back in my Dad’s car and had to head over to Georgia Tech, where the Blazers were going to be practicing. Bassy suddenly decided he needed a coffee before practice, so we stopped at a Starbucks, Bassy took our orders and ran in and fetched us all our drinks. Later that night, the biggest football game of the year, Georgia at Georgia Tech, was going down at Tech. When I turned onto the Tech campus, we were confronted by a long row of RVs, all pimped out with grills and flat-screen TVs and UGA or GT flags. People sat outside under retractable awnings in fabric lawn chairs, listening to pregame shows on the radio or just catching up with old friends.

“Wow!” Sebastian said, his eyes wide as he surveyed the colorful scene. It occurred to me that growing up in his concrete jungle, he had probably never seen people tailgate before. I dropped him off, saw him play against the Hawks one day later, wrote the story and then never spoke to Sebastian again. There was no beef there, I somehow just didn’t end up at a Blazers or Celtics game in the last two years.

The thing is, I liked Bassy. He seemed like a cool kid, he was respectful and honest. After spending a lot of time around NBA guys, you get pretty good at reading these guys — which guys want to talk and which guys don’t. You also hear enough stories about various people that you know when a guy is cruising for trouble. I’ve never heard anything bad about Bassy, other than the headlines he’s generated.

As the story came out, Bassy was still fighting through his pulled groins, which robbed him of the quickness that was giving him such a great start. In the story, I wrote:

At press time, Sebastian Telfair had started a little over a dozen NBA games. He hadn’t posted any double-doubles, had played over 35 minutes twice and had five times as many fouls as steals. But there he stands, his black T-Mac 5s so clean they nearly squeak with each step, posing for his first solo SLAM cover. But if this is the come-up issue of SLAM, full of guys who are about to reach or even topple the tipping point, then Sebastian Telfair is right where he belongs.

A few weeks later, a gun was found on the Blazers team plane in Bassy’s pillow. He wasn’t playing well, and over the summer the Blazers moved him to Boston. He had an underwhelming season there, and then this latest gun incident sealed his fate in Boston.

I don’t think his NBA career is over — he’s still just 21 years old, and you can’t teach the kind of quickness that he has. If he can ever recapture the swag he had those two months where he was tearing up the League, he could be an elite point guard.

What I’ll probably never understand is why he was found with a gun, twice. If it’s a safety thing, hire a bodyguard, dude. Otherwise, it’s just asking for trouble to carry a gun around. I know that in both instances the gun allegedly belonged to his girlfriend, but getting caught twice with her gun makes you wonder just how coincidental it all is.

And what really bothers me about all this is that I almost feel like I screwed up. I saw him playing so well, I vouched for him, I interviewed him, and I had no idea his career was going to take such a wrong turn. When I was writing the story, I talked to a few people off the record who knew him pretty well, and every one of them raved about him. So I drank the Kool-Aid too. As his basketball game has slid downhill the last year or so, I’ve watched him from time to time and can’t figure out where the old Bassy went. It’s almost like a different player on the floor. I’m not giving up on him yet, but I thought by now he was going to be a star. So far he’s just been a bust.

So what happened? Where did everything go so wrong? These are the multi-million dollar questions. Can he still straighten out his life? Or will he be another in a long line of urban legends who seem destined for greatness before throwing it all away?

Toward the end of our conversation that day at the photo shoot, I asked Bassy if his life was easier now that he was in the NBA. He laughed before responding.

“No, it don’t get no easier,” Bassy said. “It’s tough. You’ve got a great life, you’ve got money and all that, but in this league right here, it’s tough. The work ethic you’ve got to put in to be successful here, it’s so overwhelming it’s not even funny. There’s a lot more than just going out and playing games.”