Second Round Thoughts from The Commish 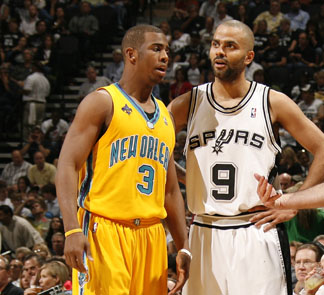 HORNETS-SPURS: Now — after an impressive 31 and 11 performance — is probably the best time for me to say staunchly, “I’m not impressed, Tony.” Try to dig deeper and feel me on what should be a universal truth, folks: Tony Parker is a Franchise Role Player, not a top flight point guard or upper echelon baller. Parker is no better of a ball player than Tyson Chandler. In fact, Chandler is Parker’s analogous Hornet, not Chris Paul (Ginobli is Chris’ San Antonio counterpart). Chandler fulfills his role (rebounding, muscle, paint-protection) exceedingly well, just as Parker scores, swings passes to open shooters and brings the ball up exceedingly well. He is an undeniably gifted slasher and finisher. He is also, undeniably, gifted at little else. Parker is basically the same player as Monta Ellis. Great scorers, but only really good players. I like how Parker’s assists seem to only come from passes he whips around the perimeter and rarely from actual creating. If Parker — and not Paul — ran point for the Hornets, New Orleans would lose about 15 more games per season. Three of the five best point guards are still playing ball and Tony is not one of them.

I found it comical that folks were, yet again, anointing Parker as some overwhelmingly great player after his performance against the Suns. His 41 and 12 was superb, but is it really a feat to average close to 30 against Nash and the Suns? His test was gonna be this series. How will you fare when you match up against an outlaw like Chris Paul? Almost piss his pants was my prediction.

I loved that the Hornets-Spurs series began with Bowen checking Chris and Chris checking Tony. It’s like Pop said, “We don’t want Tony anywhere near Paul on defense,” and Byron said, “Chris, go rough that dude up…and while you’re at it, keep accounting for 95% of our offense and making us believe, too.” Watch the Hornets when he doesn’t have the ball…he actually tells his teammates when to move, where to go and who they should pass to. It’s profound. Parker’s deficiencies as a well-rounded ball player are on full-blast in this series, because they’re in the context of Chris Paul. Which is why it’s irritating to hear folks say that this is “a matchup between two great point guards” or to hear Dick Stockton say that Parker “quarterbacked” the Spurs to victory.

CELTICS-CAVS: I can’t really respect Boston as a respectable playoff squad until they win a road game. I’m yawning at every one of their home-blowouts until they win a toughie on the road. Because, from what we’ve seen so far, the only hallmark of their road games is KG beginning the night in a rabid, manic rage and then purring like a demure kitten when it’s time to throw down. He’s the only “great” player I’ve seen that literally does not want the ball down the stretch. This is what you heard from play-by-play dudes when KG and the Cs were in Atlanta: “KG gets the offensive board with no one between him the basket and…kicks it out to Rondo at halfcourt,” or “KG has Mike Bibby isolated on the left block, but, for some reason, he’s not calling for the ball, instead he looks as if he’s boxing out for a rebound that may or may not come his way within the next few seconds.”

Seriously, who cares what Boston just did, if they go to Cleveland and drop two straight? I mean, this is the squad that went to Texas late in the regular season and came out with a sweep, right? It’s a shame that their road credentials can be called into question at this point in the season. But, admit it, you suspect that the Cavs are gonna follow-up Thursday’s gaffling with a W, don’t you?

PISTONS-MAGIC: This is what Stan Van Gundy had to say about Billups and the impact of his injury: “He is not only a great player, he’s their leader. Chauncey Billups is their guy, and it definitely had a huge effect on the game.” I think Billups is among the handful of Franchise Players in this league, so I obviously agree with Van Gundy. Sheed is the most talented Piston and the cat that gives Detroit it’s Contender Ceiling, but Billups is The Guy. When he went down in Game 3, I happened to be chatting with a friend that happened to grow up in Detroit, your typical delusional homer. I told her that Detroit ain’t winning a game without Billups. She then tried to sell me on Stuckey (whom I like as a youngster), but we all saw what happened in the 4th quarter. Because the Pistons run such an egalitarian outfit, we forget that there’s a hierarchy on that squad and that Billups is at the top. He’s indispensable — even against the Magic. That hammy needs to heal fast.

LAKERS-JAZZ: As much as I dig Booz and Deron, I’m gonna hit you with this question: Do either of those dudes exhibit that transcendent quality that would lead you to believe they (the Jazz) can impede Kobe On A Mission? I’m not calling a sweep, but based on Games 1 and 2, the Jazz seemed doomed. L.A. is my squad and I don’t mind sweeps or dominant performances, but I’m a basketball fan first. The hoops fan in me wants to see this squad get tested, because this is not the kind of historic, classic squad that should be steamrolling through the supposed toughest conference ever. Somebody — hopefully the Jazz — will punch L.A. in the mouth soon (but not too hard).

Vincent Thomas is a SLAMOnline columnist and SLAM Magazine contributor. He can be reached at [email protected]