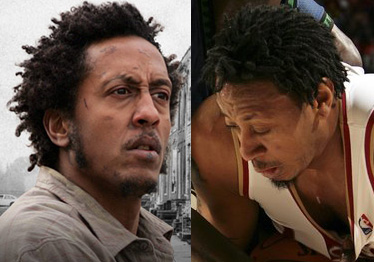 Ben Osborne sent me a text message the other night during the Cavs-Knicks game, about this potential separated at birth. This is Donyell Marshall of the Cleveland Cavs and… Bubbles from the Wire.

That’s right Donyell. We’re saying you look like a reformed junkie whose front door is a piece of plywood. All that’s missing are the sideburns.

And I’ll also take this time to post – with his permission since he never found the right time to post them himself and he asked me to on his behalf – FreeDarko’s Bethlehem Shoals‘ Wire character/NBA payer comparisons. These speak to the character of the man moreso than any physical comparison like Donyell up there or Shaun Livingston and Wallace from Season 1.
Stringer: Kobe
Omar: Garnett
Valchek: Larry Brown
Michael: Dwight Howard
Norman Wilson: Cassell
Watkins: Mutumbo
Wee-Bey: Stack