Thunder big man Serge Ibaka has steadily improved to become a vital member of a perennial title contender. More impressive, though, is the philanthropic work he continues to do in his native Republic of the Congo. 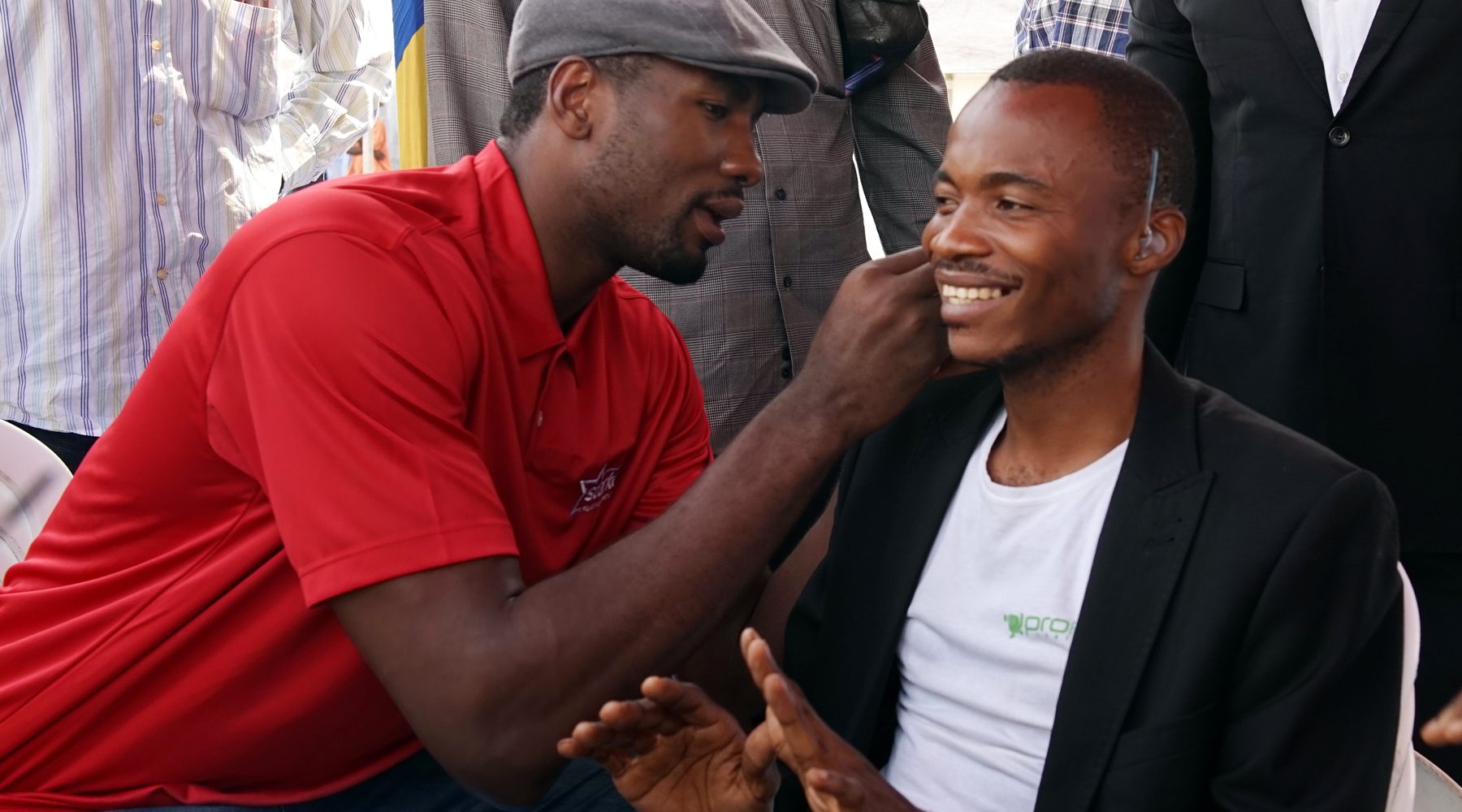 Thunder big man Serge Ibaka has steadily improved to become a vital member of a perennial title contender. More impressive, though, is the philanthropic work he continues to do in his native Republic of the Congo.

Toward the end of June of 2014, a crew of adidas-endorsed NBA players—Ricky Rubio, Joakim Noah, Harrison Barnes and John Wall—boarded a plane and began a trip that the foursome will surely remember forever. The group’s destination was Rio de Janeiro, where they watched a pair of World Cup games, ate steak at the renowned Churrascaria Palace, took a helicopter tour of the city and played pick-up fútbol on a gorgeous Brazilian beach.

If it sounds like the kind of getaway any sane human would want to experience, that’s because it was exactly that. But Serge Ibaka, another Three Stripes-repping NBAer, passed on the opportunity. Not because he’s insane, but because he had somewhere else to be: about 4,100 miles northeast, in the Republic of the Congo, a country in west-central Africa where poverty runs rampant and decent health care is tremendously difficult to come by—if it’s available at all.

Ibaka was raised in the city of Brazzaville, the capital of the Republic of the Congo. Like many NBA athletes, he returns home every summer. It’s a little different for him, though. Lots of guys were brought up in rough environs, and their ability to make it out and achieve whatever it is they have achieved is nothing short of miraculous. And yet: Ibaka’s story is a little different.

Scratch that: It’s extremely different. His path to becoming a perpetual Defensive Player of the Year candidate and a vital piece on a title contender—the recent injury woes that have clouded Oklahoma City’s future notwithstanding—wasn’t just miraculous. It was damn near impossible. And Serge doesn’t sound like he’s about to let the end of that path cause him to forget the beginning.

When Ibaka was 7 years old, literally the day after kids in the United States had watched Michael Jordan put up 38 points, 13 rebounds and 9 assists in Game 2 of the 1997 NBA Finals, the politically fueled War of 5 June broke out in the Republic of the Congo—violence flooded the streets of Brazzaville, bombs being dropped all over the city.

Serge’s family—he has 17 siblings though he didn’t grow up with all of them—fled to the small town of Ouessa during the war. He lived there for a few years before returning to Brazzaville. They would scrounge for necessities; running water and electricity were scarce, and food was expensive, so at times Serge would hang out near restaurants as they were closing, hoping those who worked at the establishments would toss him some scraps they were planning on otherwise throwing out.

When the family did make its way back to the capital around 2002, Serge’s father, Desire, returned to his former job working at a port on the border of the Republic of the Congo and the Democratic Republic of Congo. The local DRC government scooped up Desire and imprisoned him for what was essentially a “wrong place, wrong time” offense, and Serge spent months living with his grandmother without knowing if his father was even alive. He was freed over half a year later.

Desire Ibaka meant a lot to Serge. Desire taught Serge the game of basketball—he had previously met Serge’s mother through the sport, as she played in the neighboring DRC, the home of Dikembe Mutombo. As a young child, Serge would sit on the sideline of a beat-up court in Brazzaville while his father would hoop; years later, Serge would elect to wear 9, the same number his pops once wore.

“My dad wanted me to be an equal basketball player [as him],” he says. “So when I started playing basketball a little bit, he would give me his jersey. I’d start wearing his jersey to go play basketball, and I just started falling more in love.”

Naturally, there was little access to NBA games. Ibaka knew of guys like Magic Johnson and Michael Jordan, but it wasn’t until years later that an older friend of his showed him a videotape filled with Kevin Garnett highlights—from then on, he was a full-blown KG fanatic.

He first played for the club Avenir du Rail in Brazzaville at age 16, then at 17 moved to France, taking the first opportunity he had to get out of his war-torn country; a few months later he’d get situated playing pro ball in Spain.

During the summer of 2007, the agency You First Sports brought Ibaka to the US. His first stop was Las Vegas, where he trained with Joe Abunassar, with whom he still works out. Abunassar also happens to be the long-time trainer of Kevin Garnett, who was in the gym during Ibaka’s first visit.

“After the first workout, I called the guys who sent him, and I said, I don’t know what kind of contract you’re gonna sign this guy to overseas, but don’t make it too long,” says Abunassar. “He was amazing.”

The Thunder selected Ibaka at No. 24 in the 2008 Draft, though the 6-10 power forward would spend another year in Spain before joining the franchise. In OKC, he rose from rotation player averaging 18 minutes per his rookie year to his current role: a starting big man and a defensive force averaging 14.7 points, 6.9 rebounds and 2.1 blocks per game in 2014-15, his sixth season.

While Serge was back in the Brazzaville last summer, he walked into a refuge camp to find glaring needs: Hundreds of people were without both food and water.

“I’m not going to give the amount,” says Bill Horn, co-founder of Pros For Africa, an Oklahoma City-based nonprofit organization that works with Serge, “but he went to the bank and got a very large sum of money, and had water and food delivered. He doesn’t just go over there and say, ‘Let’s do this, let’s do that.’ He gets right into it. He’s hands on.” 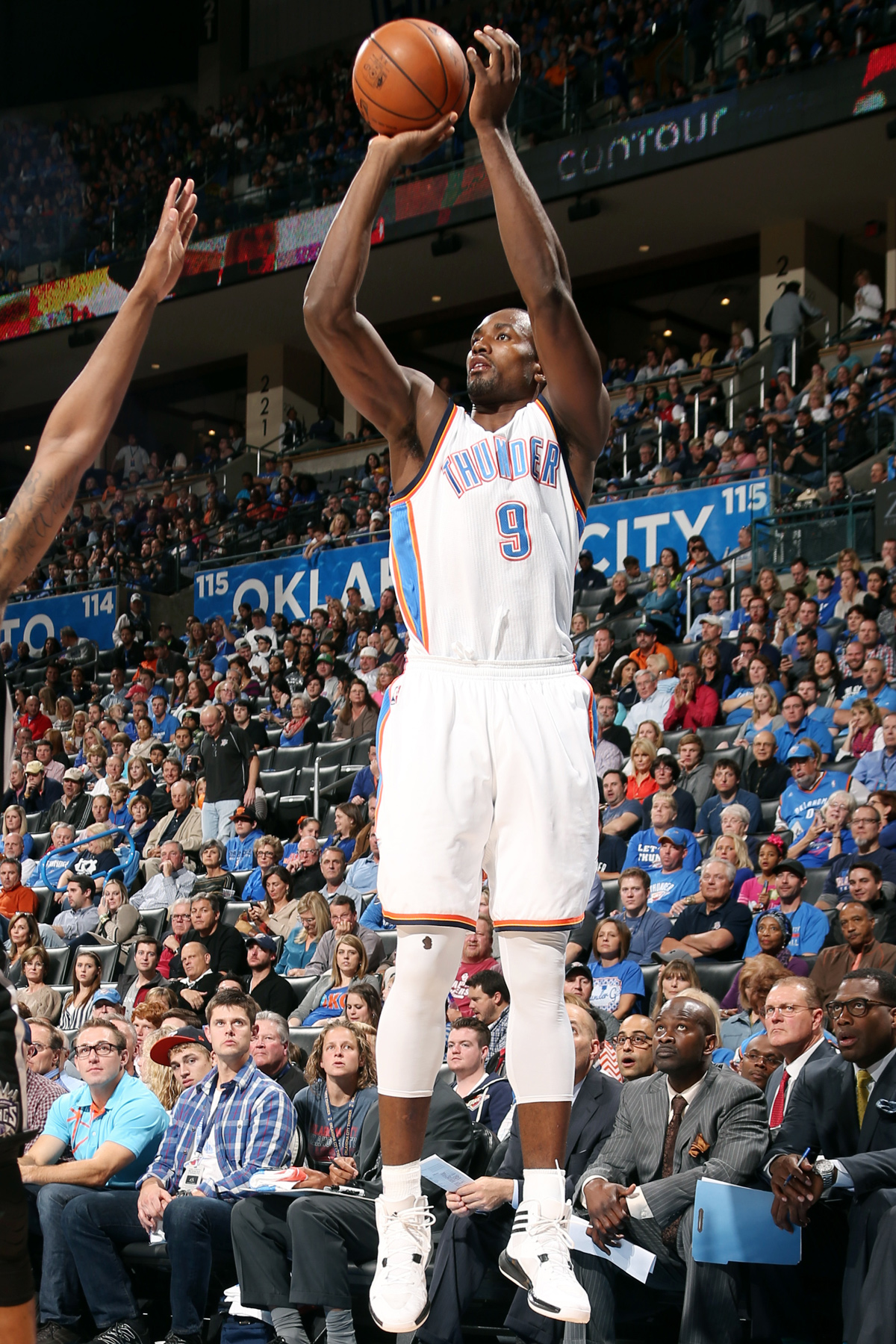 It’s not easy to compile a comprehensive list of all the charity-related things Serge does for his home country, but here’s an attempt:

He works with UNICEF to fix up a pair of orphanages—one girls, one boys—and to make sure those who live there have what they need: educational resources, health care supplies and more.

He works with the aforementioned Pros For Africa and Project C.U.R.E., who will be bringing a six-figure sum worth of medical equipment to the country.

He works with the Starkey Hearing Foundation, providing hearing aids for children, many of whom don’t know the technology to fix their deficiency exists in the first place. Ibaka sizes the aids onto kids himself. “Serge actually wound up fitting a couple of children—not just children, but teenagers—who had lost their hearing from some of the fighting with the rebels,” says Brady Forseth, executive director of Starkey. “They had lost hearing from explosions and grenades and all of that stuff, and he restored their hearing. It was very emotional for him. To be quite honest, I think he was holding back some tears.”

He also fixed up that same beat-up basketball court that Desire Ibaka once ran up and down—the dirt floor has been replaced by proper blacktop, and the crooked, net-less rims have been subbed out in favor of FIBA-official baskets, shipped over from Spain.

Though all of the scattered charity work is now going to be under one umbrella—the Serge Ibaka Foundation—it won’t be slowing down anytime soon. “Even before I started playing basketball and making money, I would always come back and give back to people,” Ibaka says. “That’s what I always wanted to do.”

Individually, at least, Ibaka has begun this season strong, if not remarkable. “I think he’s going to have a monster year,” says Caron Butler, who played alongside Ibaka in OKC in ’13-14. “He really understands the game, from a defensive standpoint and an offensive standpoint, how to get to his spots and be consistent and make shots. I think he’s hungrier after last year, knowing the importance of what he means to that organization.”

About that importance: During a series-clinching win against the Los Angeles Clippers on May 15 in ’13-14’s Western Conference semifinals, Ibaka went down with a bad calf injury—doctors speculated he would be off the floor for many weeks, through the remainder of the postseason. The Spurs won the first two games—by scores of 122-105 and 112-77—of the subsequent conference finals (and eventually the entire thing), but via some kind of scientific phenomenon, Ibaka was back by Game 3, on May 26. He went for 15 points, 7 boards and 4 blocks in 30 minutes, helping OKC earn a 106-97 victory that salvaged their season, if only for a little longer.“I knew that from a treatment perspective he was doing everything you could possibly do, plus 100,” Abunassar says.

What became evident is this: The Thunder need Serge Ibaka. They need Kevin Durant and Russell Westbrook, too (duh, man), but without their reliable man in the middle, their chance against teams like the San Antonio Spurs and the L.A.  Clippers dwindles from whatever it is to nothing at all.

“My goal is to be Defensive Player of the Year and be an All-Star, that’s my dream,” Ibaka says. “That’s why I’m coming to the gym—for that. I don’t know when it’s going to happen, but that’s my dream. And I’m going to keep working hard to make my dreams come true.” 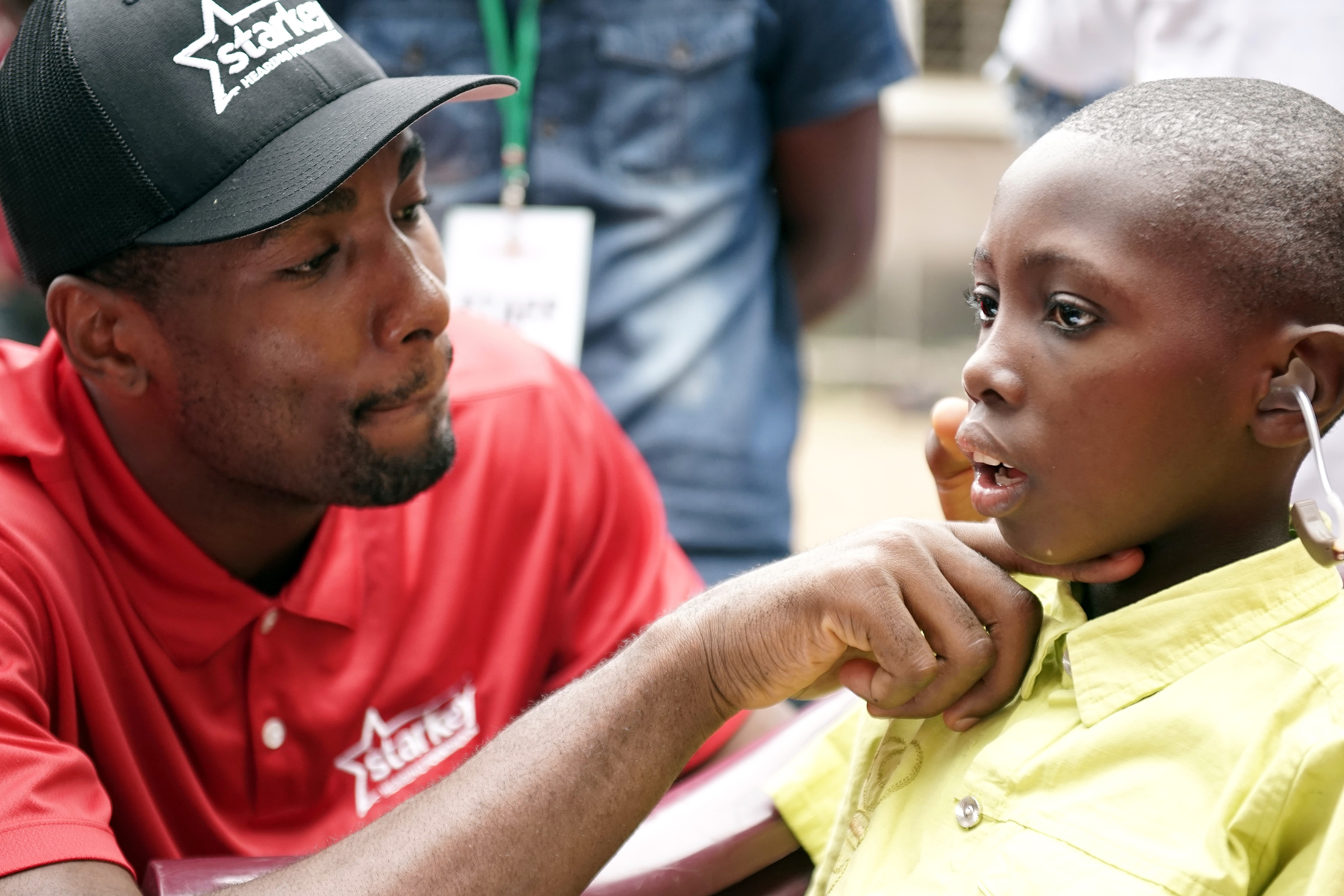 An All-Star bid will be tough (at least this year, but at just 25 years old, there’s plenty of time for that), and Defensive Player of the Year is probably a long shot, but a crucial role on a team that’ll remain relevant into the spring is almost guaranteed. (If they can squeeze into the postseason—the finally healthy team sits at 11-13 as of this writing—imagine how dangerous a 6-, 7- or 8-seeded Thunder squad would be.) In that case, he’ll keep proving that importance through April, May, maybe even June. And then in July, he’ll be back in Brazzaville, where his importance … well, that’s just not a strong enough word.

John Wall is having the time of his life—at least when he’s not busy breaking down overmatched opponents.

Following a decade of spreading the floor for others, Kyle Korver is finally seeing some long-overdue star treatment of his own.