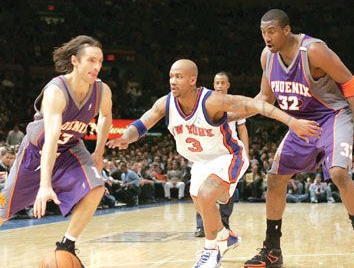 A few weeks ago, I received a copy of Jack McCallum’s new book “Seven Seconds Or Less: My Season on the Bench with the Runnin’ and Gunnin’ Phoenix Suns,” which takes readers inside the 2005-06 season with the Phoenix Suns. It’s a great book — I read the whole thing, cover to cover, in two days, mainly because I couldn’t stop reading it. Even for someone like myself who is immersed in the NBA, there’s plenty to learn, about the players, coaches, owners, staff…everything. An McCallum speeds everything along and, most importantly, makes the whole thing fun.

If you can’t tell, I highly recommend it.

We got the author himself to take a few questions from us about the book. Here’s Jack McCallum on “Seven Seconds Or Less”…

SLAM: You mentioned to me over the weekend that there may be some ruffled feathers in Phoenix. Were you surprised? Reading the book (and knowing the fragile egos in the NBA) I figured some of the guys — particularly Amare and Marion — might not be thrilled, even if what you wrote is true.

JM: I guess I’m not surprised. What has gotten the most attention was my conclusion that Stoudemire was “unreliable” in his rehab. I stand behind that conclusion. It was not a direct quote, but, rather, my observation based on spending the season with the team.
In the harsh light of day, I guess any criticism hurts. In a 300-plus-page book, there were probably 20 pages that could be construed as mildly controversial, but, naturally, that is what has drawn the attention. I understand the biz; hey, I’m in the biz.

SLAM: You’ve been around the NBA for a long time. Were you surprised by how much you learned during your year with the team?

JM: Very surprised. Among the surprises: The incredible amount of time the coaches spend together deconstructing film. The up-and-down nature of a season with even a successful team — lose on Tuesday night and you think you’re never going to win again; then you win, and you’re astonished when you lose. How much a team learns on the fly, and I’m not referring to fast breaks; D’Antoni puts in a timeout play or a new out-of-bounds play and they’re running it to perfection five seconds later. Lots of things like that. How much an injured player — in this case, Amare’ — is divorced from the team simply because he’s not there. And when he comes back, there are all sorts of adjustments that have to be made by everyone.

SLAM: You write affectionately about many of the Suns, including Nash, Raja, Eddie House and all of the coaches. Was there any one guy you couldn’t wait to see each day?

JM: There was literally never a day when I didn’t enjoy hanging with the coaches and picking up some basketball chops. I really liked every one of them. In addition, I enjoyed (a.) hearing Eddie House’s non-stop rap (b.) watching Nash prepare (c.) observing Raja struggle with his temper, and a minute later, turn into the coolest guy in the world, (d.) getting an inside view of Marion’s incredible athletcism and hearing him talk affectionately of his mom (e.) keying in on Kurt Thomas’s veteran professionalism (f.) watching Boris Diaw improve as a player.

And that’s probably not all of it.

SLAM: Did your time with the Suns change the way you view the NBA? If so, in what way or ways?

JM: No question. Most of all, I guess, is that you get a sense of the incredible drudgery of the season. There is almost no time to really rest, no time to get your legs. Yes, these guys get paid a lot of money, so I weep not for them. But that doesn’t mean it isn’t hard at times. I have a new appreciation for what the top teams must endure to stay together from October 1 until June.

SLAM: The Suns seemed to have a lot of enmity toward Charles Barkley (going so far as to take his picture down in the hallway of the arena), mainly because he keeps saying they can’t win a title with the style of ball they play. As I read the book, I kept wondering, Well isn’t he right? Until they win a title running and gunning, don’t they still have to prove something?

JM: It really is a gentle enmity, if that’s not a contradiction. It’s kind of like what every fan says to TV commentators: “Hey! He doesn’t know what he’s talking about!” It was incredible how many times someone would turn on the TV and Charles was on his refrain about the Suns.

Is he correct? Well, to the extent that, yes, the Suns haven’t won it all. But Charles begins adding up their weaknesses in early November and the fact remains that they have gotten to two consecutive Final Fours. That certainly suggests an elite team.

Now, having said that, the Suns surprised me with how far they got. I, too, saw their weaknesses and think that, all things considered, they overachieved last season.

SLAM: Now that you’ve been behind the curtain, tell us the truth: Is Mike D’Antoni the Steve Spurrier of the NBA, able to create wild numbers and get huge stats from journeyman players as a result of the system the Suns play? Or is it more about just getting good players in there and allowing them to succeed? (I think the Tim Thomas interlude has all of us NBA fans confused.)

JM: I’ve never been around Spurrier. All I know is that D’Antoni coaches the hell out of this system. He is not a roll-the-balls-out-there type of guy. It requires a daily reminder that the team is supposed to run, spread the floor and share the ball.

It would be a vast exaggeration to say the Suns have journeymen. You could make the argument that Nash, Marion and a healthy Stoudemire are great player or at least All-Star players. But D’Antoni’s great success has been in returning skill to the game. In Tim Thomas he saw a 6’10’’ guy with skill. Yes, they worried about his casual approach before they got him and were still worrying about it deep into the finals. But they don’t get out of the Laker series without Thomas’s three-pointer in Game 6.

SLAM: In retrospect, are you surprised the Suns let you spend a year behind the scenes with them?

JM: No, that’s the way the organization operates. They believe that transparency is the best course. I hope they don’t change that philosophy based on the 1% of the book that is negative. I know this: After spending a year with them, I have more affection for the organization than I did going in.