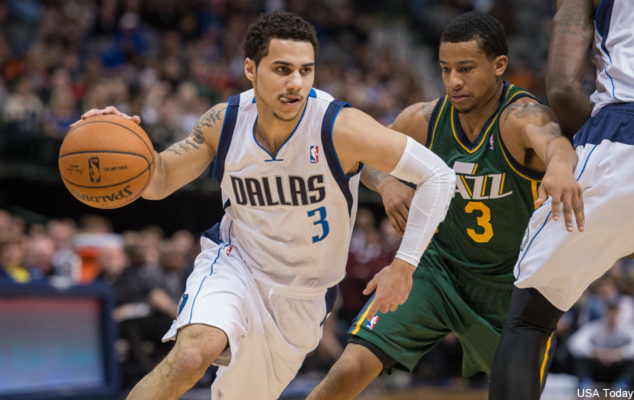 Last week, SLAM spoke with Hall of Fame baseball player Barry Larkin about his involvement in the CBS documentary Summer Dreams (premiered on March 15), along with what it’s been like to root for son Shane in the NBA. We caught up with Shane as well, who discussed his participation in Summer Dreams and how his rookie season with the Dallas Mavericks is going.

SLAM: Your dad said he gives you little tips from time to time but generally he tries to keep his opinions to himself because he was a professional in baseball and not basketball. What do you think of the way your dad guides you along as you embark on your NBA journey? Do you like that he stays away from giving too much advice?

Shane Larkin: Either way is cool to me. He played basketball, he was a pretty good player. He had offers from colleges. He knows what he’s talking about when he does give advice, and whatever he says I try to keep in the back of my head. It’s not too much and it’s not too little.

SLAM: While you were being filmed for Summer Dreams, you suffered a broken ankle. Was that the worst injury you’ve gone through, especially when you account for the timing of it all?

SLAM: What about what your dad ended up saying to you? It seemed like that really resonated with you. Would you say that’s one of the benefits of having a dad who played a professional sport?

SL: Yeah, that’s definitely the plus of having a dad who was a professional athlete. He’s been through a lot of the things I’ve been through, whether it’s not playing as much as you want to, having to be a rookie, doing all the rookie stuff, injuries, so he’s gone through it all. Just for him to be able to tell me how he dealt with it gives me an advantage.

SLAM: Going back a little, the documentary showed some pictures of you playing different sports growing up. I know basketball was always your thing, but was your dad always 100 percent behind you on basketball being your favorite sport? Or was he ever pushing you to play more baseball?

SL: He never really pushed me to play any sport except football. He didn’t make me play basketball or baseball, but he said the one sport I had to play was football. I was like 7 years old and I told my dad, ‘I want to play soccer!’ He was like, ‘OK, you can play soccer, but you have to play football first. If you don’t like it after one year, you can play soccer.’ I tried to play at Dr. Phillips where I went to high school but they said they didn’t have any spots for me, so I went to play with my cousin. The first time I touched the ball in a game I actually ran for a touchdown against Dr. Phillips, so from that point on it was football and basketball.

SLAM: Why do you think he wanted you to play football so bad?

SL: Just to be tough. I wasn’t a small kid, I was a medium-sized kid. I was pretty strong for my size, but I think he wanted me to play to toughen me up a little bit.

SLAM: In Summer Dreams your mom talks about how difficult it was for you growing up to accept some of the little things—it took you a while to have friends over because you wanted to make sure they were your real friends and not just coming over because of your dad. Obviously there were a lot of advantages to having a father with that sort of sports pedigree, but did you ever have to weed out people?

SL: No, ever since I was little I haven’t had fake people around me. My dad surrounded himself with people that he knew were down for him and that were there for all the right reasons, not just because of who he was. That’s just how I live my life now. Even when I was little, like my mom said, I didn’t have people come to the house if I didn’t trust them. I’ve pretty much taken that to how I am today. I got a lot of friends, but you’re not going to see me inviting everybody over to my house and throwing a huge party with strangers over. I’ve got a tight circle, like two best friends that I call my brothers and everybody else I’m cool with. That’s just always been how I’ve been.

SLAM: What was it like being filmed as your NBA journey is unfolding? You get drafted, the injury happens, you have the rehab and finally make it to training camp. How was that having everything on camera?

SL: It was kind of crazy how it happened, because at first it was just a traditional story of how somebody declared for the Draft and goes to the Summer League. Mine kind of just had a huge twist in it. I’m a first-round draft pick for the Dallas Mavericks that just broke his ankle on a veteran team and would be fighting for minutes, but the injury gave me a whole different perspective of what’s going on. It was cool having the cameras around and I got to know the producers and all them pretty well. We still talk to this day.

SLAM: How has your first season been? You’re playing on a Playoff contender so your minutes have been all over the place, but how has that adjustment to NBA life been for you so far?

SL: It’s been pretty good. Started off the season pretty hot, kind of hit a little slump, got out of the rotation, went back into the rotation, Devin Harris came back, so it’s been a rollercoaster ride. Playing for a Playoff contender, it’s cool just because every night it’s so intense. Every building we go into has been cool. At the end of the day, of course, I want to be playing more and I could be playing a lot of minutes on a team that’s 20-45, but it’s not as beneficial as playing for a team with a winning culture later on in my career.

SLAM: Speaking of that wining culture, you’ve got a lot of vets on that team. I know they’re not the same position as you, but to be around guys like Vince Carter, Shawn Marion and obviously Dirk Nowitzki must be really helpful.

SL: It helps a lot just to see how they still prepare to this day. Dirk is one of the first in the room and one of the last to leave after practice, just taking care of his body and getting extra shots up and all of that. Just seeing someone at that age who has had that type of success to this day shows you the type of commitment and love for the game of basketball he’s had in order to stay around for so long.

SLAM: Who’s your closest friend on the team?

SLAM: How often does your dad check in on you?

SL: We text every once in a while. I know he’s there for me whenever I need it, but I’m trying to create my own path so I don’t go running to him for everything. I’m trying to figure it out on my own just like he had to figure it out. When I’m really struggling or not understanding what’s going on or really down in the dumps because I’m not playing, then I call him and talk to him about stuff. But he’s not overly into it. He wants to be involved with me, he’s always willing to help when I call for however long I want to talk, but at the same time he keeps his distance so he can watch his son grow up and go along his journey trying to become a man.

SLAM: How was the experience of going to the D-League? I know some people get pretty down in the dumps, but other people take that as an opportunity to go out there and show why you should be in the NBA, or they just use it as a learning experience. So I was curious how you took that whole thing.

SL: It was cool. They haven’t really sent anyone down as a demotion or because they can’t play, it’s just sometimes it comes around where you’re not in the rotation and coach says, ‘Hey, this guy needs to get some minutes.’ The option is there so why not use it? That’s how they broke it down to me, and it was cool. I went down there and played 30 minutes one night, and the next day I was in a jersey playing for the Mavericks.