Shaq and His ‘Significant’ Thumb Injury 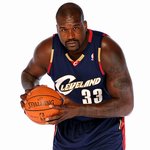 On the initial viewing, the play looked innocuous enough. But moments after Shaquille O’Neal made his way to the locker room last night, the Cavs announced that not only was Shaq done for the evening, but he could be out of action for a quite a bit of time.

For the time being, the sprain to his right thumb is considered “significant”, but until further tests are done, no one knows for sure how long Cleveland will be without their starting center.

The AP grabbed the initial reactions:

Coach Mike Brown said O’Neal will miss the Cavs’ game Friday night at Toronto. “I don’t know how long Shaq will be out,” Brown said after the 108-88 victory over Boston. “He’ll see the doctor and it will go from there.”

Brown could not say how O’Neal was hurt, but it appeared to be when Glen “Big Baby” Davis blocked his shot with just over 7 minutes left in the first half. The Cavaliers called a timeout soon after to take O’Neal out of the game, and they later issued an injury report saying he had a “significant right thumb sprain” and would not return. O’Neal was not available for comment after the game.

“We need him out there,” Cavaliers forward LeBron James said. “We play faster without Shaq in the lineup … but in the playoffs you can’t play fast all the time. You need to establish the half-court offense. That’s what he does for us.”

Though Cleveland was able to go small in the second half last night in Boston, and use their defensive quickness to turn the game around on their way to victory, they could really be in trouble without a presence down low for an extended period of time.

Oh, what’s that? Big Z is coming back in a few weeks? Right, never mind.