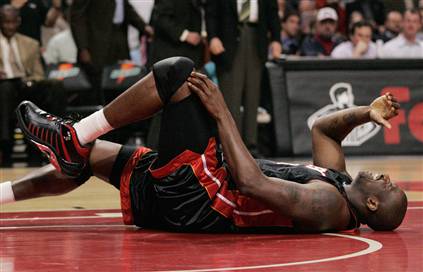 I remember vividly back when I was in high school seeing the New York Times sports section sitting on my parents kitchen table. The front page story read something like “Balance of Power Shifts in the East.” Underneath that was a photo of Shaquille O’Neal in the back of a limo in street clothes and shades and if I remember right, a cast on his wrist. This was right before the 1996 season, a year after the Magic made their one and only trip to the Finals. At the time this was great news, cause it meant the Knicks had a shot again, and for that I was grateful. A Shaq injury meant that it was safe for everyone else to think big again.

And then the Magic came out of the gate and ran up a 17-5 record without him. A big reason for their success was the play of Penny Hardaway. Shaq came back, Orlando won 60 games but lost to the greatest team ever and that was that.

The moral of the story is that they were able to survive without Shaq and ended up having a great season. Miami should be able to do the same thing, and that’s what’s happening now that Shaq is out 4-6 weeks after having knee surgery to repair torn cartilage. We’re at the point in his career where this is not surprising at all. So Dwyane Wade is going to have to do a little more. He can handle it. The East is worse than ever, which is shocking considering that there are talents like LeBron, Dwight, Bosh, Vince, Joe Johnson, Redd, the list goes on. There isn’t a single great team in the East now that Detroit lost its heart. Miami will be fine.

That’s my opinion anyway. I thought that their goal would be to ride the season out and try to stay healthy for the playoffs. It’s possible that losing Shaq so early will actually motivate them to play harder. Did you ever think that an injury to Shaq would have such little impact? Am I wrong about this?