Shaq Wants to Bring the Nets to Newark 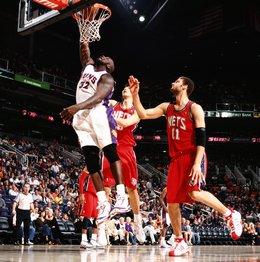 Of late, the Nets’ dream of playing in Brooklyn seems like a fantasy more than anything grounded in reality. And as a result, the prospect of Newark, New Jersey housing a pro hoops franchise has grown in popularity.

Shaquille O’Neal, a New Jersey native, would like to see the Nets make the move to his hometown. And he’s willing to lend a hand if need be.

“I have no idea why the Nets aren’t playing there,” Shaq said. “It makes no sense. I know they’re trying to get to Brooklyn, but if I was the general manager or the owner of that team, I’d be playing in Newark right now.”

“Yes. Yes. Yes,” O’Neal said in a phone interview when asked if he wanted to get into ownership when he retired. And if that team could be the Nets …

“It’d be nice — real nice,” he said. “I know the area, I know the people, it’s close to New York. Every organization needs two things: a great place to play and a couple of marquee players. You have that, and it’s a no brainer.”

Obviously, if the move was consummated, this would be a major PR coup for Shaq and the Nets. It also makes sense on a number of levels, which is probably why it has been so slow to develop.

But now, with Shaq in the mix, things might move a bit quicker in the right direction. Sorry, Jay-Z.