On the afternoon of Saturday August 22nd, the city of Newark, New Jersey came together as one in front of City Hall for a cause bigger than themselves as individuals. The community came together in order to put on a show for the people, in what was the first annual Believe in Newark 3 on 3 Basketball tournament, presented by Newark Mayor Ras J. Baraka and NBA legend and four-time NBA champion Shaquille O’Neal. The main event was the basketball tournament, but the community banded together to make of it much more than just your typical streetball tournament. 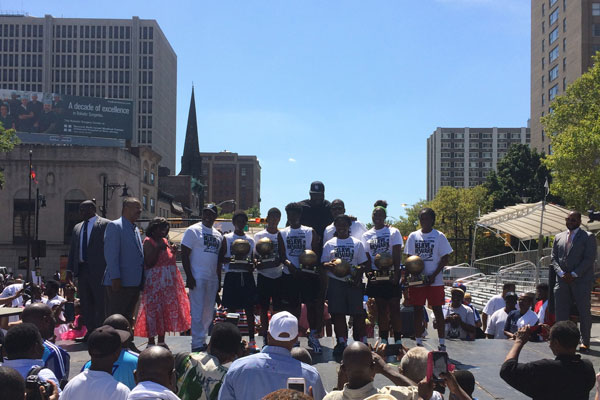 The day started with host A.J. Calloway, television personality and one of the original co-hosts of BET’s video countdown show “106 & Park,” getting on the microphone and addressing the crowd. Calloway, a New Jersey native and an alumnus of Saint Benedict’s Prep in Newark, was able to relate to the crowd and received a warm ovation in return. The tournament pre-show started off with step performances from National Pan-Hellenic Council (NPHC) fraternities Omega Psi Phi & Iota Phi Theta, and their New Jersey natives performing. Followed by them were the SHINE Tumblers, led by 12-time World Champion Power Tumbler Rayshine Harris and his youth group of kids ages 7-17, with whom he trains in Newark at the John F. Kennedy (JFK) Recreation Center.

The championship games followed, with the girls’ game being played first. The games consisted of a 10-minute time limit or the first to score 20 points. The girls’ championship game was played between The Sparks, coached by Newark native Jamie Sowers, and University High School. The Sparks team was composed of Breyonna Frazier, Blessing Ejiofor and Jabarria Brown, and the three players on the opposing University HS squad were Iyah Cooke, Tey Greene and Jihaya Chavis. The Sparks seemed to be in command early, going to the post and feeding Ejiofor to take advantage of the mismatch down low, but missed layups gave the University a chance to get in the game. Frazier took command of the game for the Sparks with the 10-minute mark soon approaching, but Cooke and her squad would prove to be the better team, scoring 20 points before time elapsed to secure the victory.

It was then the boys’ turn to claim the best three-man unit in Newark.

The boys’ championship game saw Central High School go up against “2EZ.” Central was composed of Hassan Ceesay, Haikeem Ceesay and Fajr Wilson. 2EZ’s team consisted of Jaleel Martin, Aljameen Smith and Nasir Mack. The two teams were going at each other all game, trading basket for basket throughout. However the Central team was extremely dominant on the boards, and that would eventually work in their favor and earn them championship honors.

Shaq and Mayor Baraka then brought both teams on to the main stage and presented the trophies to the winning teams. Shaq would not be himself without providing a little humor, jokingly requesting that the kids received two more months of summer vacation as he presented the trophies to the winning teams. Shaq, a Newark native himself, always gives credit to the Boys and Girls Club of America and programs like it throughout Newark for keeping him safe and out of the streets. Being able to give back to the youth of his hometown in the same manner was a huge honor for him and he was incredibly engaging with the entire crowd throughout the duration of the tournament. After the trophy presentation, Shaq signed autographs and held conversations with everyone around, not there as an NBA legend but as the kid who was born and raised in Newark.

“We always get opportunities to see young people play in and around the city in different tournaments and things like that,” said Mayor Baraka at the post tournament press conference. “But we don’t usually put a lot of light and attention on it and this gave us an opportunity to do that and it felt good to see Newarkers come out and enjoy themselves, and have a good time.” The tournament brought the community together as one, and it was great to see how far the game of basketball could bring one city.

“[The event] let’s people know we still have clean wholesome fun in our city, and there are people in the community that continue to be a part of Newark and try to transform it and make it better,” said Mayor Baraka.

The city of Newark came together as one to make this event possible: from Shaq and Mayor Baraka hosting the event, to people like Jennifer Kohl and Amiri Baraka Jr. organizing and putting together the staff for the event, to the coaches of the teams that played, to Rayshine Harris and his youth tumblers and all the Newarkers that came to support the event. Though it was the game of basketball that brought the event to fruition, it was the communal effort that made the event what it was… and that’s bigger than the sport itself.

Shaquille O’Neal Plans to Own an NBA Team in Newark, New Jersey