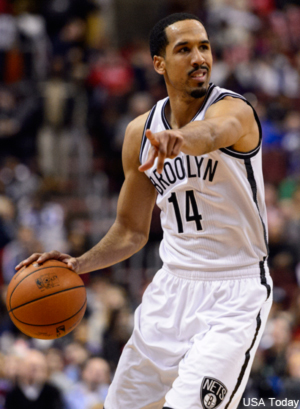 Ready for an understatement? For the major splash the Brooklyn Nets made last summer, things were not going so well at the start of 2014. In fact, they were looking pretty hopeless. The Nets sat at 10-21 on New Year’s Day, with their roster in flux and their first-year coach, Jason Kidd, coming under fire.

On December 20, Brooklyn’s one piece that was consistently producing, Brook Lopez, went down with a foot injury that would end his season. Paul Pierce and Kevin Garnett, the two future Hall of Famers the Nets acquired from Boston in the offseason, were making the Celtics look smart, as both seemed to be past the point of being productive parts of a championship roster. The team’s other All-Stars, Deron Williams and Joe Johnson, were both struggling as well—Williams with the injury issues he’s been dealing with the past few seasons, and Johnson with his normally reliable shooting stroke.

Needless to say, there was some not-so-pleasant noise surrounding a team with a massive payroll and a luxury tax bill that would make the George Steinbrenner-era Yankees blush. To the credit of the Nets’ front office, they didn’t blink. Even with Lopez gone for the season, general manager Billy King and owner Mikhail Prokhorov didn’t make a panic trade, and they didn’t fire Kidd, despite some questionable sideline maneuvers.

But something changed for Brooklyn when the calendar flipped, as they’re 34-15 in 2014 and 44-36 overall, Playoff berth in hand. With no clear-cut option for replacing Lopez at center, Kidd went the other way; on January 2, he slid everyone up a spot and inserted Shaun Livingston, perhaps Brooklyn’s least-heralded addition of the offseason, into the starting lineup on a permanent basis.

While other elements are at play—developing chemistry, other players stepping up in the wake of injuries, Kidd’s improvement as a head coach—Livingston has brought a host of factors, both tangible and intangible, that have fueled the Nets’ resurgence.

“Leadership,” Kidd said, without missing a beat, when asked what Livingston’s greatest contribution to these Nets has been. “His willingness, his IQ and understanding the game.”

Of course, like any good leader, Livingston deflected any credit for Brooklyn’s turnaround.

Despite being in his 10th season in the NBA, playing for his ninth team, Livingston is still just 28 years old. While young by most people’s standards—including Kidd’s—his teammates view him as one of the veteran voices on a team full of them.

“He’s been in this League a long time. I was playing with him in video games when I was in middle school,” said Mason Plumlee, a rookie who, at 24, is just four years younger than Livingston. “He knows what he’s talking about, and it’s coming from a strong place when he says something.”

Of course, anyone who has followed the game for the past decade knows Livingston’s story. A prodigy drafted by the Clippers straight out of high school in 2004, Livingston was an oversized point guard ready to revolutionize the position. He seemed on the verge of a breakout year in 2006 before a devastating injury disrupted his career, as he suffered a knee injury that read more like a surgeon’s patient list for a full week. Since, he’s bounced around, playing for seven teams between leaving the Clips and landing in Brooklyn. Now, he’s playing for the man he was often compared to when he came into the League, learning along with the first-time coach.

“To learn from somebody who obviously who ran the position for 20 years, the best at what he does, and just the way he sees and thinks the game, it’s helped me tremendously,” Livingston said. “It’s kind of how I’ve approached the game, so we’re thinking along the same lines.”

Those open lines of communication have helped Livingston gain the respect of the entire coaching staff and his teammates, according to Kidd.

“His confidence is still growing, he’s very comfortable with running the system,” Kidd said. “It’s great to have a kid like that to coach.“

After playing for nine coaches from 2008 through 2013, Livingston has seen his fair share of different approaches. As a fellow point guard, he appreciates the way Kidd has handled the team, even through the adversity the team faced early on.

“He challenges you mentally,” Livingston said of his coach. “Other coaches will let you play, but (Kidd) feels the game out and he kind of tries to put players in the position to succeed, just like he did when he was a point guard. Now he’s doing it from the sidelines.”

LIvingston’s contributions haven’t ended with his steadying presence, despite a pedestrian stat line of 8.2 ppg, 3.2 apg and 3.2 rpg. After Brooklyn got off to a miserable start on the defensive end—surprising when you consider the presence of a coach-on-the-floor in Garnett—Brooklyn has locked opponents down to the tune of 103.2 points allowed per 100 possessions since January 1, which would be good for fifth in the NBA over the full season. A lot of that has to do with what Livingston brings. At 6-7 with arms that seemingly stretch from sideline to sideline, Livingston’s presence has turned the Nets into a “long ball” team, as Kidd likes to call them, with the ability to switch readily, point guard through power forward. Livingston is a member of the four most frequent lineups the Nets run out, according to 82games.com, and all of them include three other guys who have played guard or small forward for most of their careers. Even as one of, if not the tallest non-big man in those lineups, it usually falls on Livingston to guard the point of attack.

“To have that kind of length on the ball, it’s really frustrating for point guards who are trying to pass and trying to get their shot off,” said Mason Plumlee. “You look at our game down in Miami (on March 13), he gets his hand on the ball to win the game. He’s made big plays like that all year on defense.”

On offense, too, Livingston has made life easier for everyone, specifically Williams.

“It’s great [having him on the floor], I get to get off the ball. I’m not forced to make plays at all times, having another playmaker out there,” the five-time All Star said.

D-Will cited improved ball movement for the Nets’ offensive surge—they’ve risen from scoring 101.9 points per 100 possessions before January 1 to 106.4 since—and it plays out in the numbers. Their assist-to-turnover ratio has climbed from 1.39 before New Year’s Day to 1.48 in games played since, and they’re averaging nearly an assist more per game as a team. The Nets aren’t shy about crediting Livingston for some of that turnaround.

“With his playmaking ability, he does a great job of using his height advantage against smaller guards,” said Jason Collins.

That reputation as a guy who looks to set his teammates up to score has paid dividends for Livingston, as he’s been able to work that height advantage around the basket. He’s shooting 47.4 percent from 8-16 feet, per NBA.com, using his length and high release to back down and shoot over the point guards who often get stuck guarding him. On a points-per-possession basis, he’s become one of the top post scorers in the Association.

“Once people start playing him for the pass, he’s shown he can hit that little jump shot,” Plumlee said. “He’s making teams pay that are really backing off of him and letting him shoot.”

Even though the team’s ascension lines up with Livingston’s increased role, the self-described “glue guy” hasn’t had a perfect season. After starting a handful of games in place of the injured Williams early on, Livingston was relegated back to bench duty as he hit a personal slump. In the midst of his struggles, the Peoria, IL, native was given a copy of Herman Hesse’s novel Siddhartha, the story of a man’s spiritual journey to enlightenment. While Livingston, with his nomadic NBA career, can certainly relate to the title character’s life as a wanderer, he took away more than just the plot details.

“It was just a learning experience, just getting out of my own head,” said Livingston. “From the mental side of things, you can think too much about your own game instead of just reacting and playing freely, just living. Sometimes, you can’t really enjoy your life experiences if you’re always thinking about them as opposed to just living in the moment.”

As Livingston stays in the moment during this season where he’s truly established himself, becoming so valued that King has said retaining the point guard will be a top priority this coming offseason, the Nets have become a team that will give any opponent a run for their money once the Playoffs start on April 19. And once the postseason starts, Livingston is going to keep doing what he’s done all year.

“I’m excited to be out there with these guys, with the coach” Livingston said, as he’s set to return to the postseason for the first time since 2006. “I’m blessed, coming from what I came from, so whatever they ask of me, I’m willing to do.”