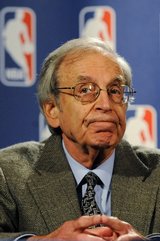 George Cohen, the famed federal mediator, couldn’t help broker a deal between the players and owners.

Following days of fruitless negotiations, an exasperated Cohen threw his hands up, packed his things, and said there was no longer any point to it all.

So, why not bring in a guy who helped end the last lockout — especially one that David Stern respects, and may even somewhat fear?

Jim Quinn is a longtime — and respected — adversary of NBA commissioner David Stern dating back to the historic Oscar Robertson antitrust suit in 1976. He represented the NBA players’ association for almost 20 years and pulled some all-nighters with Stern and union director Billy Hunter to help end the 1998-99 lockout and salvage a shortened season. More recently Quinn played a vital role for the NFLPA in its labor dispute with the NFL, overseeing the union’s decertification and the Tom Brady class-action lawsuit that gave the players some leverage for further negotiations this summer. He teamed during the football lockout with former partner Jeffrey Kessler, who took over the NBPA work after the last lockout and remains the union’s outside counsel.

“I’d be happy to help if I could,” said Quinn, who chairs a 500-lawyer global litigation practice for Weil, Gotshal & Manages LLP. “I got involved [13] years ago to try to get the thing resolved, and we did get it done. They seem to be pretty far apart right now.” I first spoke with Quinn weeks ago, after learning of several back-channel attempts to put union leadership in touch with him. That same go-between urged Hunter and union president Derek Fisher to seek input from Robertson and other past NBPA leaders. Robertson in particular was willing to help — but the NBPA contacted neither him nor Quinn. The veteran litigator did hear from Stern, however, a few months ago. “He called me right after we filed the Brady lawsuit to wish me bad luck,” Quinn said, chuckling. “We have a, I think, begrudging respect for each other. David and I go back to the earliest days of the Robertson lawsuit.”

More games are expected to soon be chopped off the regular slate by the League, there are no meetings presently scheduled between the two sides, and things look quite bleak at the moment.

A fresh perspective is clearly needed in the room whenever negotiations start up again.

Not to say that someone like Jim Quinn will bring a resolution to the lockout, but he certainly couldn’t make things any worse than they are now, right?