Shut Up And Play 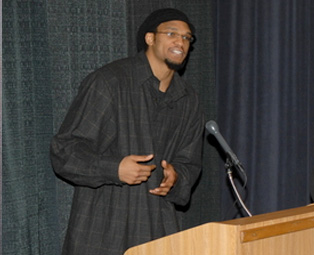 I was walking around the shopping mall on a recent off day, taking in some sights and looking for an outfit for my son. Out of the blue, this guy approaches me and begins to speak as if we have known each other for years. He spoke fast and to the point. He told me that he was watching our game the other night on ESPN and Bill Walton kept going on and on about how “well rounded” of a person I am, and how I speak my mind and how I’m a published poet, etcetera. This man said he didn’t want to hear all of that, but just wanted to watch the game, and that he was sick and tired of hearing people praise me for being overly outspoken and opinionated. I was like, Wow, tell me how you really feel.

But he was serious. He went on to say that he disagreed with me as far as my position on the war, saying who am I to criticize the President of the United States, that if I think that I can do such a better job, why don’t I quit playing basketball and run for Congress or something?

He didn’t stop there. He then said that I probably didn’t know what I was talking about anyway, and needed to do more research before criticizing the “great Republican Party.” (Yes, those were actually his words.) He then continued to ask why famous people always want to let the world know what they think about something, that nobody cares, just do what you get paid to do, which is put a ball in the hoop. Period. Then just as quickly as he approached me, he turned and walked away. Didn’t wait for a response, or even give me a chance for a rebuttal. Guess he wasn’t interested in hearing my thoughts about that either.

This is not something new for me. I have encountered this type of antipathy for quite sometime now. Which makes me wonder: Why it is that people do not feel that athletes have the right to their opinion? Even if it differs from theirs. Do people really believe that we are not human and therefore do not have an opinion? Or do they just want us to keep whatever our opinion is to ourselves?

A few days ago, I was waiting for my food at Outback, and this guy approaches me and engaged me in a debate about my article calling for Imus to be fired. I have to admit, I don’t have a problem debating and I was glad he gave me the opportunity to defend my position, but the entire ordeal was just interesting. His position was that if the type of language Imus used is running rampant in hip-hop, then how can everyone be upset with him for echoing what is so prevalent? I had my iPod on, and he said, I bet you have some rap music blaring into your ears right now that degrades women far more than Imus did. I told him that actually, I was listening to Stephen Marley’s new album, and he uplifts women every chance he gets, but that’s not the issue.

Then I went into my debate mode. I asked him if he was saying that because language such as this is used in lyrics that nobody should have a problem if someone else uses them directly toward a group of young women who have done nothing to warrant this type of label? Or if he thought that it was somehow appropriate to verbally degrade and humiliate these young women on a national stage? Or was he saying that Imus doesn’t really view these women in that manner, but has been corrupted and heavily influenced by hip-hop culture to the point that he no longer knows what is acceptable and what is not?

I told him that in my opinion he had a very weak argument. Imus himself said that he made a mistake, he apologized, the womens’ team accepted his apology and he didn’t make excuses for what he said the way that so many surprisingly are attempting to do. He did say that he was just trying to be funny, which I failed to find the least bit humorous.

So then, the gentleman got upset and he said something to the effect that I should just worry about not getting swept in the Playoffs and keep my opinions to myself and he stormed off. (I thought to myself, That was a real mature way to end this debate.)

Of course, everyone is not going to agree with me, and I expect to receive criticism from every direction. The first thing the right wing media does is try to either discredit, ridicule or vilify anyone who speaks out against mainstream America or the ideologies or policies of mainstream America. Whether they are the injustices of racism, an unjust war, inadequate funding for inner city schools, whatever. They want to discredit you to the point that anything that you say becomes obsolete and easily dismissed.

After I spoke at the Operation Cease Fire rally in DC last year, I received an enormous amount of both commendation and criticism. While some sang praises, others were appalled. This was to be expected. I actually started receiving hate mail at the Verizon Center. I don’t have a problem with anyone disagreeing with me—most right wing conservative Republicans do—but don’t try to discredit me as if I don’t know what I am talking about, just because I don’t share your view.

There were even people who created sites on the internet showing these poems that aren’t mine, and then criticizing the poems that I did not write only in an attempt to discredit me. To try to show anyone who wanted to listen to me that I did not know what I was talking about. This is the type of strategy seen almost every night on the Bill O’Reilly show or on Hannity & Colmes. Whenever there are opposing viewpoints, they ridicule, discredit, vilify or demean the person in an effort to make anything they say after that obsolete. (They are very crafty; I have to give them that.)

I was watching this special about Muhammad Ali and they showed him shaking hands with George Bush, of all people, and I thought to myself, How ironic. When talking about Muhammad Ali, it is important to remember that all of these people in mainstream America, who now look at him with reverence and dignity, did not feel that way when he was in his prime. It is important to remember that he was one of the most vilified and reviled men of his time. When he made the decision not to enter his name in the draft, not to step forward and fight in a war that he did not agree in, he was looked upon with hate. All of the people who once cheered him and marveled at his ability and overall skills in the ring suddenly looked upon him with eyes of contempt. If was almost as if they were thinking, How dare he not jump at the opportunity to fight for his country?

The reality was that Ali was the epitome of standing up for what you believed in. For having the moral courage to ignore public opinion and stand on his convictions. You have to remember that this was a different time. A time where black people all over the country were being brutally lynched, burned alive, doused with water hoses and attacked with dogs, and this was by the police. This was a time of dire consequences for such actions, and it took a proud black man as Muhammad Ali, who waited until he won the belt, until he was the heavyweight champion of the world, to say to the entire country, Gotcha! This is who I am. And I’m not going to give you any choice but to accept me as a man. You can’t put me in a box regardless of whether you want to or not.

Muhammad Ali is a symbol for self-pride and dignity, knowledge of self and knowing your destiny on this earth. This is who I looked at—along with Bill Russell, John Carlos and Tommy Smith, Jim Brown, Kareem and others—as role models. These are the athletes who I aspire to emulate as far as having the courage to stand up for what I believe in.

Which brings me back to these gentlemen who wanted me to basically shut up and play. I am never going to be the silent athlete. I am not interested in playing the role of shying away from anything that would “rock the boat,” so to speak. That’s just not me. (Make no mistake, I am not putting myself on the level with Muhammad Ali, I just have such respect for him and all the other athletes who weren’t afraid to stand up for what they believed in.)

I picked some pretty remarkable human beings to look up to. Using my position as a platform to speak my mind is something that I feel obligated to do. Giving voice to the voiceless. Saying what many people would love to say but just don’t have the public ear or the microphone with which to say it.

So whether you agree with me or not, is shouldn’t bring contempt and anger if I have a viewpoint that differs from yours. To quote Bill Russell, “You are not going to reduce me to an entertainer. I am a man who stands up for what he believes in, and you have to respect me for it.”