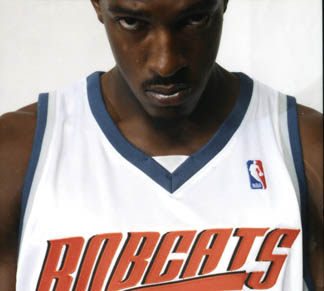 According to that giant network that Dan Patrick is finally leaving, Gerald Wallace and Darko Milicic just got richer.

In Wallace’s case, $57 million richer. The guy who couldn’t get off the Kings bench went to Charlotte in the expansion draft and proved himself to be one hell of a player—good enough to opt out of a deal that was set to pay him $6 million next season.

The 26-year-old wing, who became the first player in over a decade to average over 2 blocks and 2 steals per last season (along with 18 points and seven boards) signed a six-year $57 million deal to stay with the young ‘Cats—a bargain when compared to Rashard Lewis’s double-the-money max deal (is Rashard really twice as good as Gerald?).

Then there’s Darko. Heartlessly abandoned by the Orlando Magic as they went off in pursuit of the aforementioned Lewis ($126 million? Really?), Milicic was an unrestricted free agent for all of a week before the Grizzlies got him (apparently) for an unspecified amount. It’s allegedly only a three-year deal, meaning Darko will be able to go through all of this again in the summer of ’10—when he’ll still be only 25. Hopefully by then some of the potential will have turned into something we like to call “statistics” or “results.” Regardless, someone will probably give him the max. (And Chad Ford will still be singing his praises.)