Signings and Scandals. Another day of the NBA summer break. 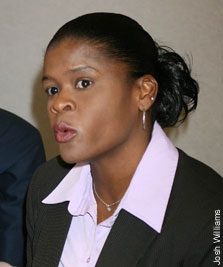 I want to thank Stephon Marbury for making my job so much easier and more fun as I crawl towards vacation. From yesterday’s New York Post story about the Isiah-Anucha sexual harassment claim going to trial:

MSG lawyers had tried to have the case tossed, accusing Sanders of trying to obstruct an internal probe into sexual harassment by forcing employees to detail charges supporting her case. Those charges include a claim that Knicks star Stephon Marbury had sex with a staffer.

“She asked at least three people to do these e-mails on an expedited basis on a holiday . . . It was, ‘I am your boss at MSG. You will do this for me right now,’ ” MSG lawyer Miguel Estrada argued.

Sanders, a former Knicks marketing director, reported that a member of her staff admitted having drunken sex with Marbury in November 2005, claiming she “did not believe she could say no because of who Marbury is.”

The staffer, whose name is blacked out in court papers, told Sanders she “was very ashamed about the episode,” which happened in a car after an “evening at a gentleman’s club.”

This allegedly took place in a car after a trip to the strip club. Hello! How are people sleeping on this story? No pun intended. Oh man is this trial going to be humiliating for so many. I’ve got to take a shower after reading about them. The Knicks have come a long way from Alan Houston and Keith Van Horn.

P.J. Carlesimo to coach the Sonics and their recently signed youth. With Presti and P.J., they are definitely going for that Spurs of the northwest thing. Kevin Durant, I hope you are not afraid of a little discipline. Insert dated choke joke here.

Chauncey Billups may or may not be re-signing with the Pistons, and Mark Cuban has a lot to say about it. It’s always nice to get lessons on ethics from a guy that is suing an ex-employee because Cubes can’t handle losing with quiet class.

Speaking of class, we (perhaps I) forgot to mention that Derek Fisher is not re-signing with the Jazz because he wants to take care of his daughter. Naturally, the rumor is that he is coming to the Knicks because that’s what everyone is rumored to be doing. His daughter lives in Jersey so her doctors would be nearby. We of course all wish the best for the Fisher family.

Alright, I think I got all the big items from yesterday. Doing a rain dance so our softball game gets cancelled tonight and I can go see TRANSFORMERS.