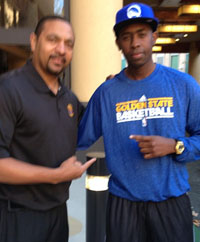 If you follow Golden State head coach Mark Jackson on Twitter, as we do—and as the Editor-in-Chief (and self-proclaimed biggest Mark Jackson fan on the planet) of SLAM certainly does—you may have noticed something curious taking place on the ex-NBA point guard’s timeline in recent months. Aside from plenty of Warriors talk and a bunch of excited-fan retweets, Jackson often corresponds back-and-forth with No Limit rapper Silkk the Shocker. And not in the way a celebrity would with a fan, or the way two celebrities with a mutual but distant appreciation for one another would. They communicate with each other the way close friends do.

“I’ve been knowing him for quite a while,” Silkk told us earlier this week. “He’s a constant motivator. What he stands for is unbelievable to me. I could see why the Warriors are having success, and I could see why the players adapt to him. Because, really, he changed my life, totally.”

As Silkk tells it, the two originally met in New Jersey, back in the mid-2000s when Jackson was calling Nets games for YES Network. After the ex-Knick point guard moved out to Los Angeles full-time at the end of the ’07-08 season—he was previously commuting back and forth across the country whenever possible—he invited Silkk, who spends a lot of his time in L.A., to visit the True Love Worship Center, the Southern California church where Jackson is a pastor.

“I really heard and understood what he’s really about and the values that he has,” Silkk said. “He’s a real pastor, man.”

The two hit it off, with the NYC-raised Jackson becoming a close friend and mentor of sorts to the Louisiana-bred MC. “From there, my son hung out with his son,” Silkk said. “He treats my fam like [his] fam. Him coming from the basketball world, me coming from the entertainment world—he understood that part. He had to deal with some of the stuff I had to deal with. In the [entertainment] business you don’t really have a lot of friends. If you come into a situation, as a friend, the only thing I ask for is for someone to come into it with great motives, and not come with, ‘What can you do for me?’ I think me and him share that. Just getting to know him and understand him, you understand why he’s a great leader.”

Silkk, who days ago released the initial single from The Game Changer, his first studio album in almost a decade, says he’s a New Orleans Hornets fan “by default” but a Warriors enthusiast because of his relationship with Jackson. He spent some time with the Golden State organization during the ’12-13 preseason, meeting the players, even participating in a pick-up game with members of the team’s front office.

“I’m cool with some of the athletes on the team, and they’re all really cool guys,” the rapper said. “So now I’m a Warriors fan. I’m looking at stats, checking out trades. I’m 100 percent into it.”