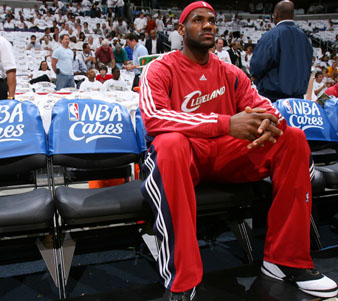 …know the difference between a king and a pawn.” – Jay Z, D(is)S track.

There are a few things in this life that I am sure of. First off, intimacy is amazing and makes life worth living. Second, the hippopotamus at the Philadelphia Zoo looks exactly like John Goodman in the face–it’s uncanny. Third, don’t ever bet against LeBron James.

Really, the more you (non-Wizards fans) doubt LeBron James, the more you’re feeding into a…wait for it…dogged, subconscious, aesthetically preferential under-doggedness…that plagues perspective. Sure, the Wiz could have won round 1, and it wouldn’t be wise to think the Celtics won’t win round 2. But with King James, you never know. Ever. It’s like, if I gave you one in three odds that there would be some awesome 2,000 word metaphor post put up on SlamOnline on a random Tuesday during the dog days of February, would you take the odds? What if the bet was that if you were right, you get a million bucks and if you were wrong, you die. 1 in 3 odds that you perish.

The initial impulse might be to take the money. But you’d be fool, for two reasons.

Uno: Even if you win, you’re disparaging the game’s sacredness for financial gain, something you’d have to live with for the rest of your life. And unless you’re a corporate lawyer like White Hot Eboy, I don’t see that happening. Call me naive, but I maintain that Tim Thomas has trouble sleeping at night.

Either that, or he sleeps too well.

One or the other.

Really, both options suck. And it’s the same way with LeBron. Bet against him and either you fail to recognize the essence of the game’s best young player, or you’re eliminated. So sit back, relax and let him rock the Mike right.

Now, I don’t know if LeBron James was the MVP of the league this season, and I don’t care one way or the other. In fact, the whole idea of an MVP flies in the metaphorical face of a team game. Two full years ago I made the case that Bron-Bron was the league’s MVP. If I gave a sh*t, I’d revisit it by adding paragraphs to that tower of babble, claiming that he was already robbed literally while everyone argued that Kobe was screwed in the “career collective” sense (congrats to Kobe, by the way; much deserved–any of the fantastic four could have won it and I wouldn’t have cared). Here’s an excerpt from what I wrote then:

In the first Links game report I ever wrote, I coined the term “Brontageous™”—revolutionary excellence proving to be contagious, as if his teammates were catching a behind the back, no look cold—because I felt that it was the perfect way to describe a young man whose game had an overarching influence on his teammates, and, more importantly, made them better. That’s an MVP.

(Footnote II: If you’re surprised that Wally World went Waterworld from three in game 6 or that Boobie started lactating when nourishment was necessary, you really haven’t been paying close enough attention over the years…No offense.)

Ben and I were talking recently about the inordinate amount of hate (though maybe “disrespect disproportional to overall accomplishment” is a better way to put it) Bron receives in these parts. This is interesting because a long, long time ago, yesterday afternoon, deep in an imaginary internets cave covered in SLAMups and vintage kicks, a debate between the 4 horsemen (former and current SLAM E-I-C’s was taking place…)

Tony G (Jordan Era): This is the basketball bible. You know the rules. Respect the game; don’t shit on the parchment.

Russ B (Shaq/Kobe Era): “When all is said and done he has the ability to be the best player in NBA history. But the “King James” nickname is all too appropriate. His sense of entitlement is astounding. The expectation is that everyone will just bow down and get out of the way. How DARE DeShawn Stevenson say he’s overrated! (Which he is, actually.) He’s the Xerxes of the NBA. Unfortunately for the Wizards, the Spartans lost too.”

“Bissinger”, as Russ was dubbed by his argument adversary, and Ass-Kissinger, went back and forth like that for a while, debating the merits of “King James.” Current SLAM E-I-C Ben Osborne tried not to allow the tornado of spit-fire to consume him, but it was too late.

It’s funny because SLAM is LEBRON–at least we’re supposed to be. If we’re not showing the right amount of perspective on a national/international level, then who will?

LeBron’s rep will continue, outside of Ohio, to be that of this perfect machine whose perfection many resent because it makes them insecure about themselves. There’s validity to this. Who can look at the way they perform their job and then look at LeBron and feel good, let alone a sense of self-worth defining accomplishment? It’s impossible. It gets worse for people looking to vent–some internalize their feelings while others are offended immediately–when LeBron starts referring to the Cavs as “his team” and talks about his all-encompassing importance to “my team” in the media because he’s so young. Who does that young whippersnapper think he is?

Answer: The 23 year old captain of the team. People outside of Ohio should focus more on paying attention to his precocious leadership skills instead of looking down on him for having the gall to be a leader. (Ironic note: people do this because they are sheep, not leaders and because any true self-reflection can be damning.)

Non Clevelander 1: Yo, dude. Good to see you again

Non Clevelander 1: This is my friend Jose.

Non Clevelander 2: Oh my God, where did you get those shoes, Jose? Those shoes are awesome. Wow. Totally jealous of your kicks. What do you do, Jose?

Jose: When I’m not building things–like the fountain of youth I started outside of the Rose Garden in Portland recently–I’m a Partner in a law firm that represents the welfare of people vacationing in Dubai. I also really love to paint. Actually, some of my work is having a gallery showing in Monaco in a few weeks. You should come. We’ll fly you out.

Non Clevelander 1: Tell him what else you do, Jose.

Non Clevelander 1: No, dude. The other thing.

Jose: I don’t get it. I just invited you to come fly with me? Oh, this is about you, isn’t it.

Non Clevelander 2: Why are you bragging so much?

Jose: You just asked me what I did for a living?

Non Clevelander 1: You know what? The more I think about it, I can’t believe you’d be that arrogant, Jose. What are we, your charity cases? You know what? We’ve decided that you think you’re better than us. Stop being such an elitist and fly your G-4 back to Teterboro. Really. Scram, Kanye, I’m sick of your attitude.

We’ve gone from mystifying Magic&Bird, to deifying a persona Michael created, to nitpicking Kobe to bits, to completely dehumanizing LeBron James. Part of this is because LeBron is smart and knows to keep his name out of your mouth (except for when it comes to something like putting DeShawn Stevenson in his place, which is what made the situation so unique). But seriously, the progression of the causal NBA fan’s superstar judgment is analogous to someone asking for a four count and the response being:

“They’re all actors
Lookin at themselves in the mirror backwards
Can’t even face themselves, don’t fear no rappers
They’re all weirdos, DeNiros in practice
So don’t believe everything your earlobe captures; it’s mostly backwards
Unless it happens to be as accurate as me
And everything said in song you happen to see
Then, actually, believe half of what you see
None of what you hear, even if it’s spat by me”
(Jay Z, “Ignorant Sh*t, American Gangster)

The unnecessary disrespect snowballs. Which is why I feel many picked DC to finally prevail over the Cavs. Was it possible? Sure. Impossible is nothing. (Actually, in a recession, impossible is money, but I digress…) Was it probable? Hell to the no. Selfishly, many wanted to believe it was, belittling LeBron’s supporting cast and casting aspersions (convenient psychological diversions?) on last year’s accomplishments–luck based though they may have partially been–because the team regressed slightly during a meaningless regular season while adjusting to injuries and trades.

Truth: If LeBron hadn’t missed 5 games in late November and early December, all losses, Cleveland would have matched or posted a win total similar to last year despite the persistent adjustment period.

In chess, you’re supposed to protect The King, not do everything in your power to try and fail to expose it.

Get over the fact that he’s better than you at what he does, and grow up. Or turn off Mozart when you’re trying to think better.

One or the other.