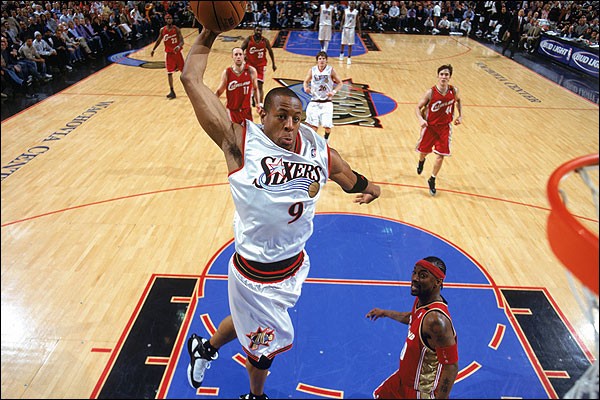 SLAM: Are you happy that AI stayed in town (for now, anyway), or should management have tried harder to ship him out?

JB: I’m happy to have him as long as he wants to play here. It appears that AI is happy to stay and refocus himself to team goals, because individually there’s not much more he can do. He carried the team last year and needs more support from his teammates and coaching staff if they are to improve over their losing record from last year. If the losing continues this year, both sides would likely seek a trade around the deadline. If there’s a deal that Billy King can’t refuse (like the one that brought Webber to Philly), he’ll pull the trigger. The only scenario this offseason that would have met the criteria is receiving a high draft pick in return (Randy Foye, Brandon Roy, or Rudy Gay).

The big question this year, just like last year, is whether or not Iverson and Webber can work well together. Can they?

The better question this year is whether Iverson and Webber can incorporate Andre Iguodala into the offense. The Sixers were 9-1 when Andre Iguodala scored 20 or more, and 10-0 when three players did it. On the defensive end, Iverson needs to put more pressure on the ball and Webber can’t be so flat-footed when it comes to defensive rotations. Offensively it can work, but defensively it is doubtful. The Sixers can incorporate more zones to mask their matchup deficiencies, but it is up to the coach to set it in motion.

Speaking of Iguodala, he improved practically every facet of his game last season. How much better can this guy get?

He can get scary good IF HE WANTS TO. His problems last year were settling for the defensive stopper role without looking for his offense. He has all the physical tools to be a superstar of Vince Carter/Paul Pierce status, but he still has to grow into the mental aspects of the game. He’ll continue to make strides, but it will probably be another year or two before we can say he’s arrived.

The Sixers added some key pieces this offseason. They should be better than last year, right?

On paper, yes. Any decline in Webber’s production should be countered with an increase in Dalembert’s output. In theory, the same should hold true of Iverson and Iguodala. However, too often last year it was as if the Sixers were playing a man down. If it wasn’t Kevin Ollie on offense, it was Allen Iverson on defense.

Defensively, it’s going to require some coaching adjustments. One advantage is that Cheeks has more options for the wing, with a pair of defensive-minded rookies in Rodney Carney and Bobby Jones to help Iguodala. Offensively, the added depth and a healthy Willie Green will give Cheeks more choices so he isn’t stuck starting Ollie. Korver can come off the bench and stay fresh, and the competition for the 5th starter spot will bring out the best in them. At this point it looks like we’re counting on a big rookie year from Carney or a Comeback Player of the Year from Green to improve from last season. And basically, I think both are 50/50. In my optimistic outlook, that adds up to 100%.

Alright, enough foreplay, how will the Sixers fare this season?

Based on past performances after Iverson faced down trade rumors over the summer, I think the Sixers will have a bounce-back year. There’s reasons behind the hype, but someone has to step up big for things to happen. The division is wide open and should be very competitive. In my biased opinion, I say the Sixers can squeeze out 9 more wins and win the division at 47-35.