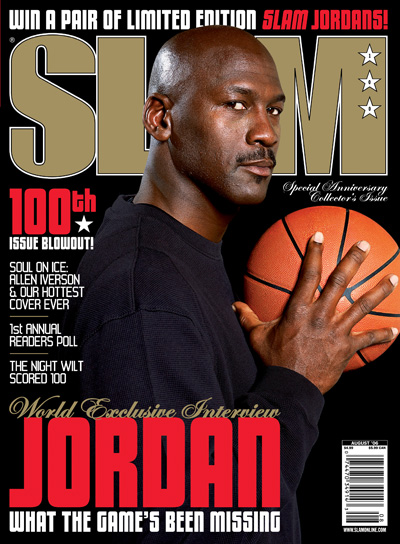 The 6th Man: This letter was going to start with a sarcastic rundown of all the people and things you wouldn’t find in this issue, but because even I’m sick of making Keith Closs jokes, and because I’ve got a lot to squeeze in here, I’m going to get right to it.

It wasn’t a conscious thing (although it probably should’ve been), but I think we’ve put together an issue that will make it really, really difficult for anyone to complain about. A lot of you will, because that’s the nature of loyal magazine readers, and I appreciate that. But really, what more could you want? We’ve got Mike, for God’s sake. Jordan himself, live and in the flesh, in an interview and photoshoot that no one else on the planet is going to bring you. As is noted in one or two other places in this issue, Michael Jordan was a mediocre minor league outfielder when SLAM first hit newsstands in 1994, which didn’t bode well for the NBA’s popularity or this magazine’s survival. But Mike came back, and we figured things out. The rest, you know. What you most likely don’t know is what’s been on MJ’s mind lately: His thoughts on the state of the game, the youngsters battling for his crown, his favorite kicks, how he’s spending retirement, and his own unrivaled legacy.

We’ve got Allen—the anti-Mike, in a lot of ways, except for the similarities: incredibly dope game, and incredibly enduring appeal to those of you (and us) who live and breathe the game. Specifically, we’ve got Allen Iverson and the ridiculously entertaining tale behind our hottest cover ever.

We’ve got Steph, which will absolutely inspire some hate mail from those of you who’ve never understood why “we’ve got Steph” is a concept we couldn’t escape if we wanted to. It’s a long story, and Russ tells it perfectly.

We’ve got Wilt, because he did 100 a long time before we did. We’ve got the next great high school hype-generator. We’ve got the best players of our era in retro style. We’ve got the all-time Slamadamonth. We’ve got love for all the random, unforgettable shit that happened since we started. We’ve got kicks that’ll have message board zombies drooling. Basically, we’ve got everything in this issue. It’s SLAM 100, and if you don’t like it, you’re just trying too hard.