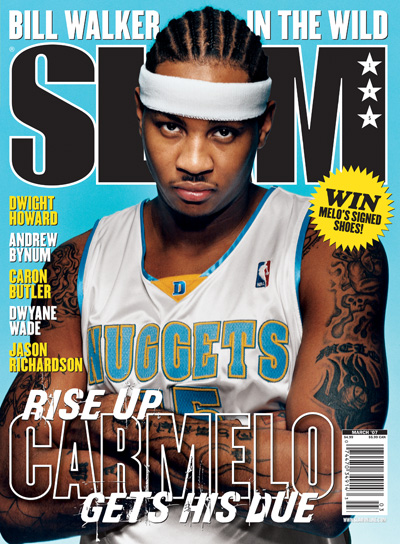 The 6th Man: The covers you see above are one man’s opinion of the best work we’ve done in the past seven-plus years. That’s also the amount of time that elapsed between my arrival at SLAM and my last day on the job. By the time you read this, my and my fam should be just about settled into the Central Pennsylvania farmlands, where, other than watching my alma mater get beat up on the regular by visiting Big Ten powers, my daily hoop jones will go largely unsated. But it was my choice, and the timing seems right, so I won’t complain.

Since you asked: My first day at SLAM was actually my 26th birthday, fall of ’99. My first duties included taping all the old SLAM covers to the walls of our then-new office and cleaning out the grime-coated air conditioning vent above my desk. The job description hadn’t specified such glamorous work, nor did I know I’d split most of my time answering Trash Talk letters, filing photos and fetching the mail while, occasionally, finding time to actually write some stories about basketball players. But it was cool, and it got better. A little more than seven years later, I leave with just about two years as SLAM EIC on my résumé and more memories than I could’ve imagined.

To confirm your suspicions: Yes, working at SLAM is pretty great. I’ve been to probably 150 NBA games in the past seven years, not to mention a slew of college, high school and streetball runs, and I haven’t once paid for a ticket. I’m on a first-name basis with future Hall of Famers, and I might literally be the only guy on the planet who’s had exclusive, one-on-one interviews with Mike, Kobe and LeBron in this millennium. I’ve got exclusive kicks some of you would rob me for if you knew where I lived. The money was never great, but for an incurable basketball fan, the benefits have been unreal.

The best part? Actually, it’s none of the above. The best part has been waking up, every day, excited about going to work, being part of a great staff that never took itself too seriously but always treated the game with respect, and knowing that every month, a few hundred thousand of you couldn’t wait to see what was next. It’s been amazing, and it won’t stop. Ben, you’re up.