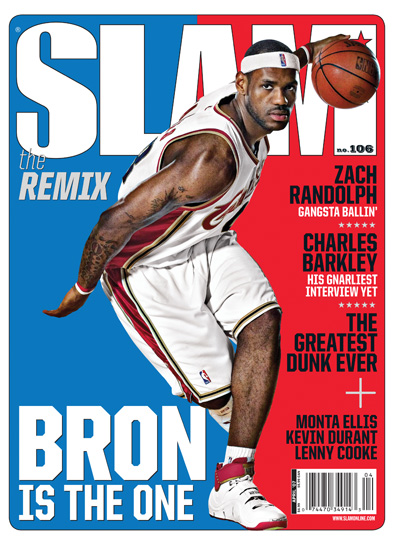 The 6th Man: Fellow attendee Stephon Marbury putting on a shooting clinic as a 12-year-old at Syracuse basketball camp. Rasul Salahudin flying to the rafters at Mount Vernon High School. Mark Jackson demonstratively directing traffic for the Rick Pitino-era Knicks. Michael Jordan and Larry Bird dropping jewels on worn-out tapes of Come Fly With Me and Larry Bird: A Basketball Legend, respectively. Scottie Pippen serving as the Bulls’ Assistant MVP. These are the scenes that made me fall in love with the game of basketball. And when you’re a kid, that’s what it is: Love. You don’t care what a guy makes or what they do off the court—you care about how they play the game, and how watching them play makes you feel.

LeBron James running the show for his older teammates. Brad Miller knowing when and where to lead a cutter. Kobe Bryant hoping the game will go down to the wire so he can nail a game winner. Greg Oden becoming an ambidextrous shooter while rehabbing his right wrist. Lance Stephenson trying to keep his composure. This is who and what I watch now. Whether I’m viewing on TV or in person, I’m more analytical now. I know what guys make, and I care how they got here. I also appreciate—so much more than I used to—how hard it is to do what they do, how there are lessons in the work ethics of successful basketball players that are useful to any person, in any profession. These are the thoughts that make me respect the game as an adult.

The point is, basketball can be looked at many ways. Doesn’t matter if you’re young or old. Black, white or brown. Despite the efforts of certain marketers who may try to tell one group of people basketball is only for them, then on a different day tell a whole different group, no, now it’s for you, in truth basketball remains a game for everyone. And SLAM remains the magazine for each and every one of you. Worship the game? Love it? Respect it? Appreciate it? All of the above? We got you.

With a new look conceived in part by my esteemed predecessor Ryan Jones (Nittany Lions in the house) and executed to perfection by our dedicated staff, I hope this first issue with me as the editor-in-chief hammers the above point home as forcefully as a Dwight Howard dunk. Each issue should have more playful copy for the kid in each of you, as well as a more serious feature for the thinker in each of you, all while bringing you more players from every level of the game than you can get anywhere else.

And of course, we’ve got LeBron. Could I have opened with anyone else?