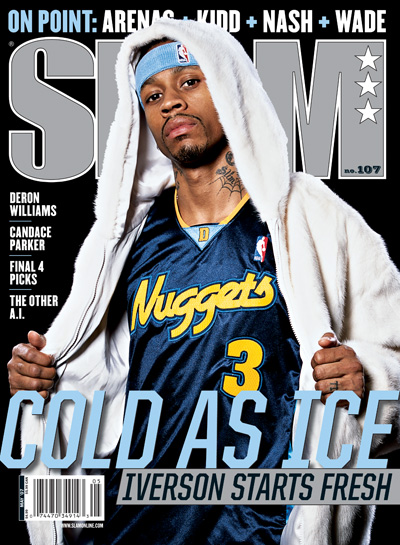 Looking back, Allen has been a cover stalwart for SLAM since before I even started working here, blessing us with an action shot as a Georgetown Hoya and eight posed portraits as a Sixer, selling well every single time and always making us proud that we were onto him before any other major media outlet in the country. Until December 19th of this season (the day of the trade, you short-memoried “fans”), this was looking like the rare season when we weren’t going to give AI the front page. Frankly, the thought of him slogging through another season with the increasingly horrible and irrelevant Sixers was too depressing to warrant a cover. But then came the sweetest early Christmas present a SLAM reader (or editor) could hope for—AI got sent to the Nuggets! The team hasn’t found its rhythm yet, and in the brutal West it’s hard to image them surviving more than one or two rounds of the playoffs, but that doesn’t change the allure of seeing AI in a new setting…one that he couldn’t be happier about.

As for the cover’s actual look, I want to thank our fashion whiz, Kelvin Coffey, for securing such a sweet fur on short notice, and I want to thank Allen for rocking it so well. I wasn’t at the shoot, but I’m told his response to the request that he put it on was, “Anything for SLAM.” The love in that line prompts just two rhetorical questions from me: 1. How could we not be happy for this guy? and 2. How could we not give him a cover showing off his new look?