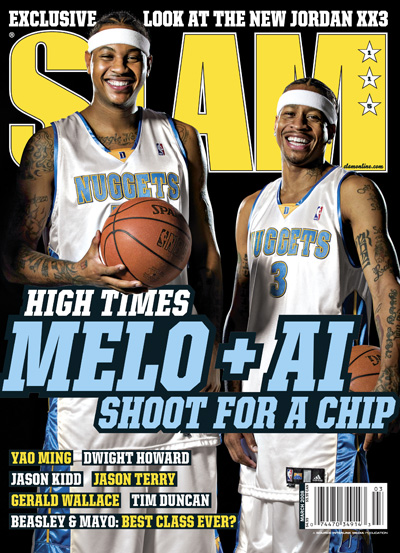 The 6th Man: After covers that were obvious to me and required little convincing of our publisher (OJ for the back to school issue, KG for the NBA preview issue and Kobe for being Kobe), this month provided no obvious front-page subject. We tossed around a ton of names, but for a couple weeks, nothing clicked. I’m too polite to name names, but some teams in consideration imploded, someone gave us a crappy photo shoot, and some “stars” still don’t have the Q Rating required to move copies (which, unlike some of the other mags out there, is an actual goal of ours).

A last-ditch, deadline-week look through the standings provided an easy answer: the Nuggets may not win a title, but playing better than .600 basketball in the Western Conference is always a good look. And while George Karl is a good coach, Marcus Camby a great shot blocker and Linas Kleiza and JR Smith underrated offensive players, obviously the story of the Nuggets is the story of their two stars, Carmelo Anthony and Allen Iverson, who just so happen to have as good of relationships with SLAM as any current player. Neither of them has ever shared a SLAM cover before, but these are special circumstances: as cool as ever, and possibly happier than ever, this is a high-profile duo that will scare a WC power or two come spring time. And regardless of what does ultimately happen when they have to deal with the Spurs and Mavs of the world, we know that between now and April 16, there will be no team more fun to watch than the Nuggets. That’s because of Melo and AI, marketing icons and scoring geniuses who own personal stories that become very similar upon reflection. We’re glad to offer you the chance to think about that as well.

Getting this photo shoot and story done on extremely short notice would not have been possible without serious flexibility and assistance from photographer Atiba Jefferson, contributing editor Russ Bengtson, Nuggets Director of Media Relations Eric Sebastian and, of course, these two great players. Just the latest reason we’ve got love for y’all.