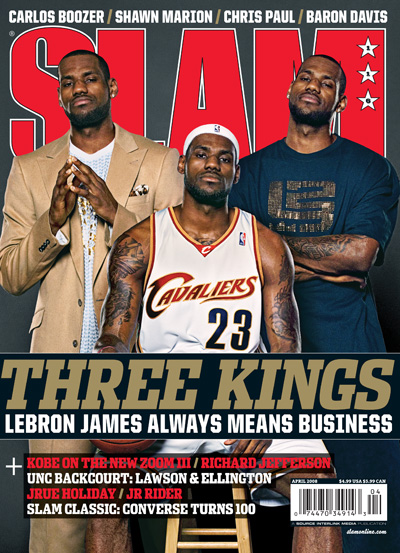 The 6th Man: If you saw some (some, not all) of the letters we received every month, you’d know that there is a portion of our readership who might not be amongst the world’s most critical thinkers. And it’s that population—let’s generously call them “naive”—who would probably believe me if I said this cover was shot with LeBron and his two secret twin brothers.

But I’m thinking positively this month, hoping that as we continue to grow and improve as a magazine, our readers are getting a little brighter and deserve the truth about our photo shoots. And the truth about this one is that we couldn’t have done it without Senior Editor Khalid Salaam. That’s Khalid (note: Not a real Cav fan; he reps the Sixers when not on the job), posing as one “LeBron” so that our Creative Director (Melissa Brennan Winkler) and photographer (Atiba Jefferson) could properly pose the real LeBron. And so it went, until LeBron had been shot in each of the three positions and Atiba had utilized Khalid to make sure they were all lit and posed correctly. Thanks to all three of them for their work on set, and check the result of Khalid’s real reason for heading to Cleveland on pg. 54.

As for putting LeBron on the cover in the first place…pardon the immodesty, but this is just another big W for us, taking stock of a man whose game—and portfolio—are still growing.

At the other end of the spectrum is Converse, the iconic shoe brand which is celebrating its 100th year in 2008 and subsequently earned an entire SLAM Classic section, which begins on pg. 77 and runs in lieu of our typical Old-School feature. While we do spotlight some classic Converse endorsees from down through the years (think Doc to Magic to DWade), we also cover the shoes, a nod to the fact that SLAM is nothing without KICKS.

Lastly, for those of you who don’t care about Old School either way, or perhaps player-hate to such a degree that you’re ready to call LeBron played out, check back next month for a cover that will be, in a word, fresh.