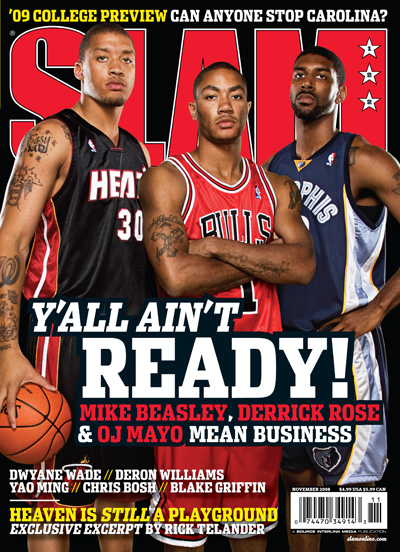 The 6th Man: While most of the adults I idolized as a kid were athletes, I looked up to sports writers as well. One of these writers was Rick Telander, a former DI college football player who was a regular presence in the ’80s in Sports Illustrated, the veritable bible of my childhood. I’d later read Rick’s stuff in the Chicago Sun-Times (where he was, and still is, that city’s greatest sports columnist) and in his less-frequent appearances in SI and ESPN the Magazine. Rick got cool with SLAM’s Chi-based former Editor-at-Large, Scoop Jackson, and that led to his becoming a very public supporter of SLAM at a time when many in the “establishment” could barely contain their sneers at our young staff.

I hooked up with Rick when we spoke in the late-’90s about the NBA’s heinous airbrushing of an Allen Iverson photo, and we stayed in touch since. Sometime in there I read Rick’s book, Heaven is a Playground, and said to myself, This should be in SLAM. That innocent thought crystallized last winter when Rick and I talked about the passing of Rodney Parker, a Godfather of New York City’s basketball scene and the main character in Heaven. Rick realized with amazement that it was coming up on 35 years since he’d first come to Brooklyn to report on its basketball stars. The book, which holds up beautifully, was adapted to a movie in ’91 and has been re-released several times, but it’s never been excerpted like this. Rick’s and my hope is that his brand-new intro and lengthy excerpt (which begin on pg. 70) give life to the book and knowledge to SLAM’s younger readers, who should love a glimpse into the past of the game—and culture—they cherish. I’ll have a lot more about Rick and Heaven on my Slamonline blog, Continuing Ed., while Ricktelander.com should be your source for ordering the book. Enjoy.

P.S. The above notwithstanding, we’ve got love for the future, too. Peep the cover story on this year’s tremendous rookie class (pg. 54) for proof.