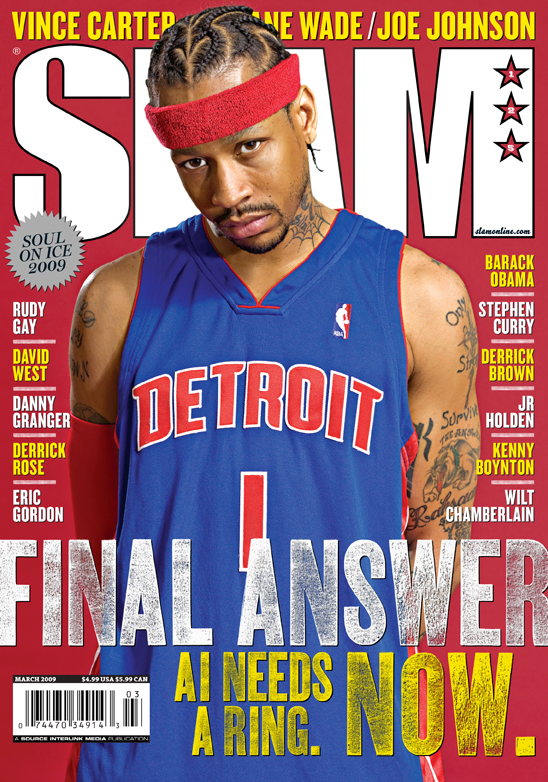 Happy New Year everyone! Before we go any further, I’d like to ask all SLAMonline readers to make it their resolution to read former online editor Sam Rubenstein’s Christmas Eve column. It’s possible we all have different tastes, but my main guess was that the relatively low number of comments was because of a low number of eyeballs on it due to the date it went up. I thought that joint was so good, and I hope you do too.

While your beloved site continues to be tweaked to perfection (trust: Ryne is obviously doing his thing already, but this is still far from what it will be), the folks on the print side of things keep grinding away. The first SLAM of 2009 will be on newsstands everywhere (at least in the US) this coming week, and we’re feeling pretty good about it. As far as I know, no one on the site (contributor or commenter) truly confirmed that AI was the man for it, despite there being several hints in the comment section on our last cover post, not to mention this solid story in the Detroit Free-Press. We didn’t link to the former because we were trying to maintain some element of surprise for this cover, and I guess no readers linked to it because they don’t care about the FreeP? That’s a whole other story.

So, some AI context. As the Free-Press story says, and as any longtime SLAM fan knows, dude has basically been an annual cover for us since he came in the League. And honestly, we never felt the slightest inclination to apologize for it. Besides the joy he has provided us with for 13 years, sales numbers show that he’s been either the most or second-most (MJ) popular cover subject in SLAM history. Simple truth of magazine publishing: when someone sells, you put them on the cover again. And again.

This season, though, AI was no lock. Considering he was hurt for much of training camp and the Denver situation had grown stale, even we would have had trouble figuring out what to say about Iverson this year. But then Joe Dumars dropped this little present in our laps. The day the trade happened, I deemed it a win-win. Pistons shake things up, make themselves better contenders this season, clear minutes for Stuckey and have AI’s cap space next summer if they don’t keep him. The Nuggets get a hometown hero who plays a better pure point to stabilize things. I felt the trade solidified the Pistons as the third-best team in the EC. There were some other names bandied about in our story meeting for this issue, but it took our publisher about 12 seconds to confirm: “AI is the cover.”

That settled that. And I was cool with it. The player most identified with our mag over the years, now on a new team with legitimate title hopes? Let’s do it. Our people at Reebok were excited about the trade and possible cover as well, so they worked with us and the Pistons to set everything up. Bet.

Then, right as we were all working on the issue, we had to watch in horror as AI skipped practice, there were all sorts of stories about the players and Michael Curry not being on the same page, and some flat-out embarrassing performances, including this fiasco I attended with Appleson.

There was never a doubt that we could argue AI deserved this cover on some lifetime achievement ish, but was calling him relevant this season a stretch? Well, with the issue’s national on-sale date just about here and subscribers mailboxes ready to be blessed in a week or two, I can thankfully say, hell no! Ready or not, the Pistons are finding a rhythm, and in my opinion are back to firmly being the team just below the Cavs and Celtics. Obviously a fourth- or fifth-place conference finish is extremely problematic because a trip to the Finals will most likely require a tough first-round matchup followed by having to beat Cleveland and Boston in back-to-back series. Beating one of them will be hard. Both? Hard to see it.

But shoot, injuries happen, and motivation is a funny thing. There aren’t many—if any—teams in the League that fit what any knowledgeable fan can say about this Pistons roster: If they stay healthy, come to play, and play together, they can literally beat any team in the League in a given game or series. And as I say in the cover story, it will be hella fun just to see AI playing in a playoff series or three when he has a chance to win them. You know he hasn’t been past the first round since ’03, and he’s only even played in 14 Playoff games (that’s two 5-game series and last year’s pitiful sweep) since then. Those numbers are not exactly how our man Allen thought his career would go. “I thought I’d have three, four championships by this point,” he told me. “I definitely thought I’d be back there a lot more after 2001.”

What else did Allen have to say in the 40-minute sitdown interview he gave us? How fresh are the pictures we got of him in his new uni? Buy the issue and find out!