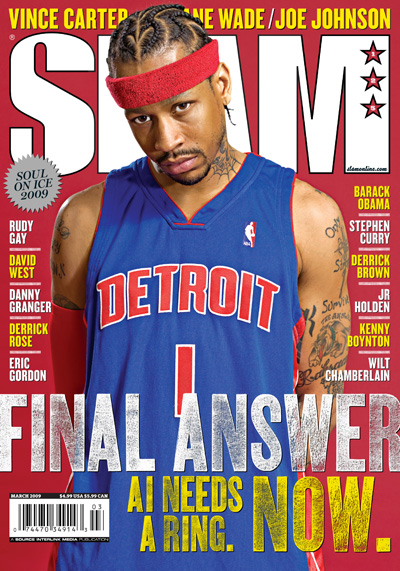 The 6th Man: Ten years ago, I can say with authority, Allen Iverson’s hair had a lot more life in it. (So did mine, if we want to keep it real.) I learned the truth behind AI’s hair in a rare look at the man who, by the numbers at least, can safely be called SLAM’s favorite player ever. Of course MJ gets love from us, and LeBron and Kobe have got more covers coming their way, but at this point in our history, with 125 (!) issues in the books, Allen Iverson is the SLAM cover leader; this one marks his 12th.

Given Allen’s history with us, his new blue jersey and the fact that the iconic cover (readers’ favorite in our SLAM 100 poll a few years back) you see up top here was on newsstands exactly 10 years ago, we asked AI (via his Reebok people—thanks Mandy and B. Lee) if he’d celebrate his trade to Detroit by recreating this classic image. We didn’t get a firm “Yes!” in response, but we didn’t get rejected either. So when Allen’s hairdresser strolled into the Pistons practice facility ready to get to work right before our shoot was scheduled to begin, photographer Atiba Jefferson and I were like, It’s happening!

Alas, when I went back to the players’ lounge to interview Allen for the cover story, his now-droopy hair was being re-braided and Allen said simply, “My hair can’t do that anymore.” Oh, well. Considering we’ve gotten some AI covers done with 10 minutes worth of pictures and no sit-down q+a, we gladly settled for an extended interview and photo shoot, blowout or not. I won’t tell you I broke through the considerable shield Allen has built up in the presence of media members, but I felt like he shared some good stuff. You’ll have to turn to page 64 to find out his thoughts, and my thoughts on his thoughts, but I will say I found him engaging and absolutely as determined as ever to live and play the way he wants to, regardless of what anyone has to say about it.