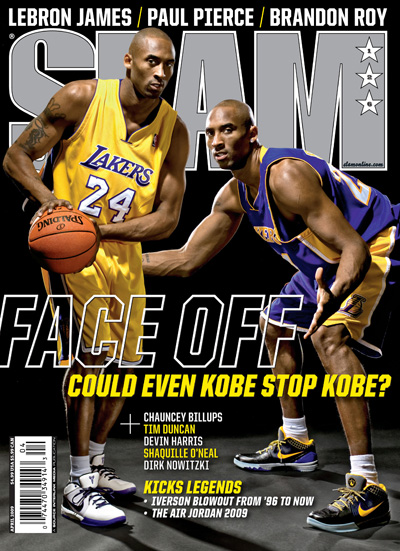 The 6th Man: My first issue as Editor-in-Chief came two years ago, when my co-workers and I built on the template that the likes of Tony, Scoop, Russ and Ryan had laid and tweaked it to keep us as fresh as any mag in the game. As usual for SLAM, it started with the cover, where we creatively and skillfully took LeBron James—one of the most in-demand athletes on the planet—and got enough time from him for us to build a new logo for the NBA (DS has yet to utilize it, but that’s his problem).

Twenty-four months later, the game (magazines more than bball) has changed. Dramatically. Ad pages down, paper costs up, everyone heading to the internet. Shit, we’re not immune to it. We’ve had to trim some costs, and we’re spending more and more time on our site, the ever-improving Slamonline.com.

That said, we’re not going to stop making a great magazine. Once again, Creative Director Melissa Brennan has executed a slick redesign: nice enough for you all to be reminded how good SLAM looks, but calm enough that the mag retains its essence. And again, we ring in a new era of sorts with what is, honestly, a remarkable cover. Just like LeBron, if not moreso, Kobe Bryant is a megastar, with the deepest of commitments to his craft and mad requests for his time, not much of which he’s inclined to share with writers and photographers. But we came to him with a sick concept like this, and Kobe graciously got down, giving ace photographer Atiba Jefferson (above) all the time he needed to pull off yet another sick cover for the SLAM Wall of Fame.

So, treasure the cover, enjoy the stories inside and keep riding with SLAM. The times have changed, but we’re still doing our thing.