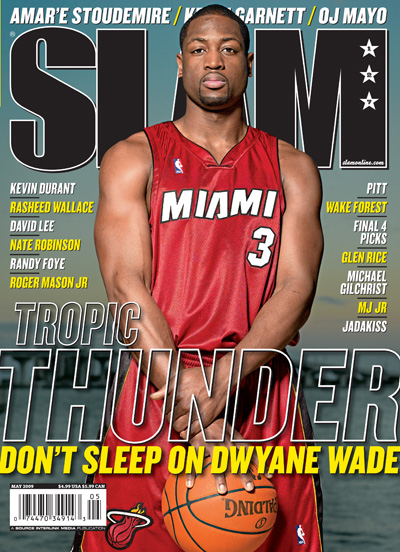 The 6th Man: SLAM photographer Atiba Jefferson and I were in Milwaukee to shoot and interview a very amenable Dwyane Wade on the spring day in ’03 when he declared for the NBA Draft at a press conference. Hard as it is to believe at this point, there was no guarantee he was turning pro as opposed to returning to school for his senior year. As Lang revisits in his cover story, even if Dwyane’s explosive scoring ability was obvious, his size, handle and hoop background were all questioned. After all, in that era of preps-to-pros, who’d even heard of this kid from the outskirts of Chicago? As you all know, Dwyane crushed any doubters and exceeded even the rosiest forecasts, becoming the first of the vaunted ’03 Class (Bron, Bosh, Melo) to lead his team to a title.

Despite a couple of injury-plagued seasons, Dwyane’s ascent to superstardom continued, with the gold medal and commercials only raising his profile. Still, perhaps because of that lack of props at a young age, he’s remained a humble guy who’s easy to work with. As you can see in this outtake from our photo shoot, nearly six years after Atiba first shot him, Dwyane literally jumped at the chance to be on our cover. Aiming high, with Atiba again calling the shots, we asked Dwyane to do a lot for us: pose in uniform in the gym, dribble, jump and dunk in the gym, pose in casual gear, and pose in uniform by the bay outside the arena. Dwyane gave us all of the above, and then some. As you can see on the front, we went with the outside look, but I thought this jumping shot was cool, too.

The point is, just as Dwyane refuses to take being on our cover for granted, we don’t take his cooperative attitude for granted, either.