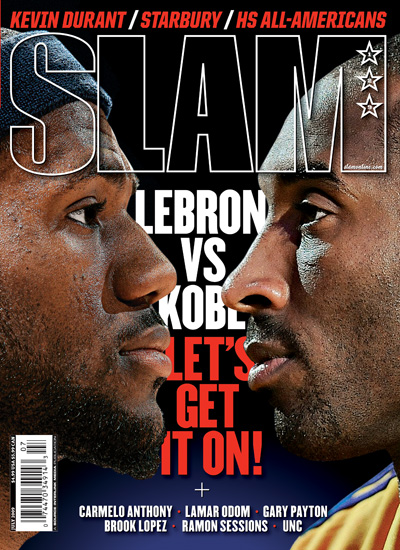 The 6th Man: Picture me knocking on wood with one hand the entire time I type this column with the other. Long-time SLAM readers should know why I’m taking measures designed to bring good luck—do Dirk and Shaq ring a bell?! That ’07 debacle was largely erased with last year’s Playoff-time cover of the Celtics’ Big 3, who obviously went on to win it all and make us look pretty good in the process.

Well, I think we’ve got a second straight slam dunk this time around. I mean, at this point, as of late-April, with the Lakers and Cavs getting players back healthy while other “contenders” are falling apart around them, these teams are about as prohibitive of favorites as you can be. The Lakers we pretty much all saw coming. The Cavs have surprised. No matter how they reached this point, such favored status is influenced most of all by the teams having the game’s two greatest players, each at the top of their game. The way things are shaping up, this June could give us a truly memorable Finals series that isn’t just “meant to be” in the is-the-NBA-in-cahoots-with-ABC-to-make-this-happen? sense, but truly meant to be. Any way you slice it, any sport’s ultimate championship series is when its two best players and two best teams meet in the Finals.

I hate to even go here (that jinx factor again), but the other thing about this cover is that even if an injury or upset were to knock L.A. or Cleveland off track, the debate over which of these two is greater would rage on, at least for this offseason. Which leads to the other rationale: the time for this cover was pretty much now or never. Before this season, LeBron was still an indifferent defender. Meanwhile, after this season, it’s fair to expect some slippage from Kobe as his body continues to absorb punishment. Yes—LeBron will probably get better and Kobe will still be amazing. But they will probably not ever be as close to their respective peaks as they are at this very moment. Time to ice my knuckles.