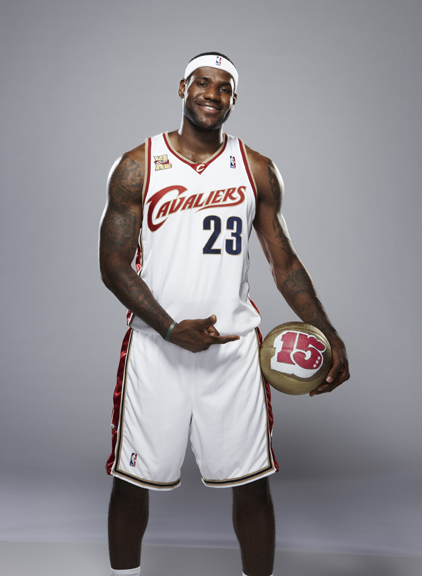 by Ben Osborne     All photo portraits by Scott Council/scottcouncil.com

Within minutes of learning that the Cleveland Cavaliers had acquired Shaquille O’Neal last June, I sent Lang a text message: “Well, we’ve got our 15th anniversary cover.”

That’s right, people. SLAM is now old enough to drive in several states. Last January, SLAM publisher Denis Page and I looked at our 2009 publishing schedule and put a plan in place for what themes, if any, each issue would have. Since SLAM started in 1994, we knew we needed to do a 15th anniversary issue this year, and we thought that rather than run one in the midst of last season, we could pair it up with our NBA Preview issue for this season and have a very special edition. What we had no idea of at the time was who would be on the cover…

We had other/plans for Michael Jordan (the top 50 issue we thought of then, and a Hall of Fame tribute we thought of when the buzz around Mike grew all summer long), and the preview aspect dictated that it be guys relevant to the upcoming season.

AI? A SLAM legend for sure, but after last season ended we didn’t know what team he’d be on, or if he’d really “matter” this season (we still don’t, to be honest).

Kobe and Wade were solid possibilities, but the former has been on mad covers recently, and the latter’s team will be in a dog fight to even make the Playoffs, so his ultimate relevance to the season was in some doubt as well.

There was another guy with Miami ties, however, who had to be in consideration, especially if he could get off the sinking ship in Phoenix; none other than SLAM’s favorite big men ever, Shaq Diesel. And you know we were talking up LeBron for the spot as well. He’s been our man since he was a sophomore in high school, and it could be said he is the most important player in the game for the next 15 years.

So, once these two—SLAM favorites, and ultra-relevant to both this season and our 15-year history—ended up on the same roster, boom!

Not that we tried to shoot it right away, though, as we still had a summer of work on other issues ahead of us. I just felt good that in my head I knew what we were doing for SLAM #133, which we knew would be probably our most important issue of the year.

We started trying to secure a time for a photo shoot back in August. Problem was, given their world tours, shoe launches, TV deals, etc, the two of them didn’t actually have any definitive plans to be in the same area code until Cavaliers Media Day, which was slated for September 28th at the Cavs practice facility in Independence, OH. That date was very late in our production schedule and terribly risky because it would be too late to have a back-up cover, but shit, if this was the destined cover, we were going for it. After many emails, the Cavs’ outstanding Director of Communications, Amanda Petrak, gave us the green light: Shaq and LeBron agreed to do the shoot, we’d be their last commitment of media day. This meant a guaranteed quick shoot and q+a, and perhaps more since they wouldn’t have anything to do after us.

Photographer Scott Council was hired, flights were booked. With the deadline too late to assign to a freelancer and Lang busy building our preview for the issue, the story was all mine.

That Monday the 28th I took an early morning flight to Cleveland—where the wind and cold made it feel more like November 28th—and drove my rental car out to the Cleveland Clinic courts, where masses had assembled. I took copious notes as the likes of Danny Ferry, Mike Brown and Delonte West spoke about the insanely high-pressured season that is about to tip off (I can think of few examples, in any sport, where a team was more designed to win NOW, than this one, with two of the biggest names and egos in the game, both in the last year of their contracts, playing in the American city most desperate for a championship). I listened to Bron speak, too, but was saving a few of my questions for the exclusive SLAM time later.

Then, less than an hour before our shoot, the lights went out. For real.

A power failure had struck Independence, OH and after a couple hours of milling around—and Shaq meeting with the press in the weight room, where natural light allowed cameramen to shoot video that would’ve been invisible in the gym—it was announced that media day was over. No pictures for SLAM (or anyone else). No quotes for SLAM. No way the amazing cake we’d had made for the shoot was going to survive.

And we were due to print the magazine in days. Thanks, wind. I’m a pretty mild-mannered guy but it was hard for me to stay calm as I digested this information.

Amanda, apologetic as she was, could not guarantee if/when a re-shoot could happen. I just knew the absolute latest anything could happen to get them on this cover was Saturday, October 3. Sure enough, after countless emails between myself, Amanda, the photographer, our printer, our Creative Director Melissa Brennan (who did her thing as usual), we got a 9 am slot that Saturday morning. I wasn’t able to do my second R/T to Cleveland—and besides, I’d needed to write my story already—but Scott was, and he did a great job.

Despite the early morning hour, Shaq and Bron were professional as always, gracing us with the very special cover you’ll see on newsstands in NYC this weekend and nationally next week. (While turning down overtures from many other magazines to give any of them an exclusive shoot.)

Needless to say, if you’re a fan of Shaq, LeBron or SLAM (ideally all three), this issue is a must-have! Besides the sick cover, some more pics of them we snuck in there at the last second, and my cover story (I worked with what I had—a truncated media day—and extrapolated what the day’s quotes and events, in concert with the two players’ pasts, mean for the season. Consider me cautiously optimistic it’s gonna work).

While working on the story I did a phone interview with my main man Mark Jackson, the NBA’s lead TV analyst, and got his thoughts on how the Shaq/Bron show would fare. Action’s quotes didn’t fit in the story because of the media day focus I ran with, but I thought they were relevant here. I’ll say this: Mark is not as confident as me…

“I thought it was a great move for them, put them right in the mix of title contenders,” Jackson says. “But I wanted to know what their next move would be. Shaq helps, he gives LeBron another guy who is not scared of the spotlight. But their perimeter guys will make the difference.”

And not enough of one, Jackson fears: “Anthony Parker was a good pick-up, but matching up with the Magic is still a disaster for them. Styles make fights, and the Magic are a tough match-up for them. Boston has three big guys who can play the pick and roll—Kendrick Perkins, Kevin Garnett and Rasheed Wallace. The Cavs still lack that.”

“I think it’s going to be interesting,” Jax concludes. “I like the idea of them all having a good time. It’s LeBron’s team, and that’s no secret. But Shaq will help. They all just have to have one goal: winning a championship.”

Personally, I think that goal is going to be met.

Lang’s official SLAM preview differs with my view slightly. Seeing his views on the champ to be, in addition to every other team, is another solid reason to pick up the ish.

And if you’re fan who, for some reason, doesn’t care about this year’s Cavs, or our predictions for how the divisions will shake out, there’s still plenty of stuff for you, much within the 15th anniversary theme: Vintage photos of the best players to enter the League since ’94, a first-person piece on the last decade and a half by Commissioner David Stern, an awesome q+a between SLAM OG’s Tony Gervino and Scoop Jackson, a sick old-school piece by Russ about the ’94 Dream Team II, and so much other ill shit. Cop it as soon as you see it!