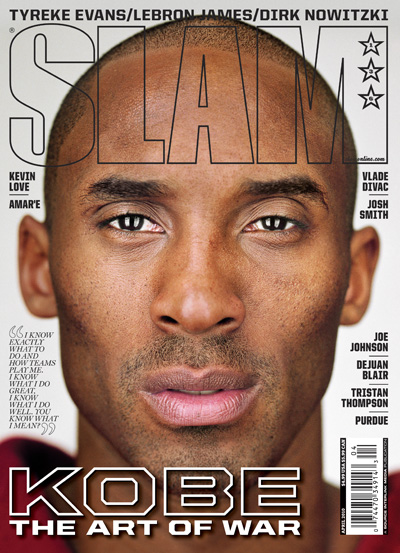 The 6th Man: Guess what Ed. is thinking about today (*Elmo voice*)? That’s right, it’s the fact that the day before this page goes to our printer, Kobe Bryant will be the guest star on Sesame Street. Yes, this fact has special resonance to me as the father of a 2-year-old, but pretty much anyone with a TV should understand the significance of Kobe appearing on the world’s most famous children’s show. I mean, what type of odds could you have gotten against such a programming decision ever being made back in July of 2003?

Is Kobe reformed? Did he even need reforming? Honestly, I don’t know. I don’t know what happened in Colorado. Neither do you. I do know players don’t eagerly give us cover shoots to discuss stuff like that, and I don’t think readers come to us to read about it, either. What I do know is that combining the Sesame Street gig with some other readily available facts gives Kobe a lot to be proud of.

As SLAM OG Russ Bengtson explains in his outstanding cover story, Kobe has gotten where he is today (four-time champion, top 15 in points scored all-time and still south of 32 years old) largely by staying the same: hard-working, resourceful and obsessed with being the best player he can be. Russ focuses on what Kobe has done on the court. The off-court love has simply come with it: As we went to press, Kobe was looking like the first- or second-highest vote getter for what will mark his 12th All-Star appearance. And that’s one voting situation we can’t say anything bad about.

By the way, little man in the great shirt was not a plant. He just showed up in a bunch of photos of Kobe’s December visit to JHS 45 in East Harlem. I think it’s more like, bring an NBA star to meet a bunch of kids, and chances are one or more of them will be repping the game’s greatest magazine.