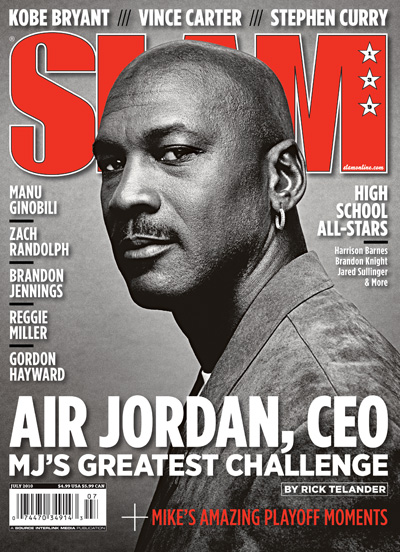 The 6th Man: I’d be lying if I said I had such a grand plan for this issue when we first talked about it as a staff, but as I flip through the page proofs in the days before it goes to print, it strikes me that this issue is what this magazine is all about. The two most prominent, work-intensive stories cover the two subjects that SLAM couldn’t have made it this far without: Michael Jordan and high school All-Americans.

Think about it. Michael is the one who made this whole thing possible. The one whose greatness on the court and business savvy off it took basketball from a sport to a way of life. We’ve covered him as closely as possible for our entire existence, with this month’s two MJ stories—and all the attention his buying of the Bobcats has gotten—serving as the latest proof of the hold he still has on everyone who follows the game.

At the other end of the spectrum are the young kids, the SLAM All-Americans. In their own way, the five players we pick each year (this year’s group is Perry Jones, Kyrie Irving, Jared Sullinger, Brandon Knight and Harrison Barnes) as the best high schoolers in America are as important to SLAM as Mr. Jordan. The talent they possess, the hard work they put in, the entertainment they provide, it all adds up to proof of what he inspired. And SLAM got that from day one. From the Punks section to high school diarists to hanging banners and giving out mags in gyms across the country, we’ve always known that for every big-time baller (none bigger than Mike, of course) there were thousands of kids striving to take his place, and they deserve love, too.

If you’re not feeling the connection yet, guess what all these guys were in New York for when we brought them to Times Square for this photo shoot? The Jordan Brand Classic, of course.