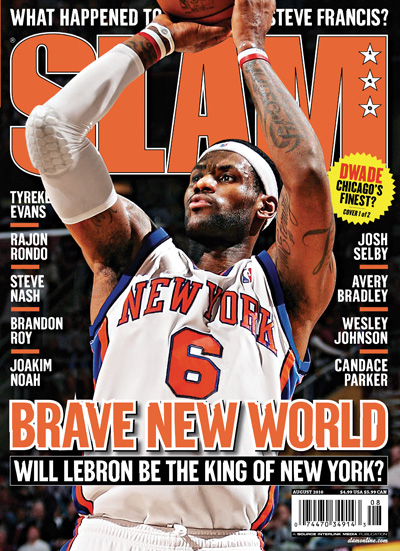 The 6th Man: Well, it’s here. The summer of free agency NBA fans have been hearing about ad nauseum ever since LeBron James, Dwyane Wade and Chris Bosh chose to sign three-year extensions back in 2006 (which began in ’07) with the express intent of keeping their options open for this summer.

Is this stuff-contract talks, rumors, salary cap math-what we love about the game? Of course not. But we can’t deny what’s happening. As July 1 has gotten closer and closer and the amount of teams playing for anything of note this season dwindled, it was inevitable that more and more people would shift their focus to next year.

So why not play along? Working off the premise that most things in this magazine should be fun and well done, we enlisted image wizard Peter Possenti to build these arresting cover shots (totally original when we thought of it; maybe Adam Moss has a spy over here) and the great Dave D’Alessandro to write an educational and funny piece breaking down the myriad possibilities of what could happen to the NBA over the next month or so.

Coming on the heels of Rick Telander’s MJ piece last month, Dave’s story marks the second straight cover feature penned by a nationally renowned sportswriter. It’s no disrespect to any of our regulars-who are peppered throughout this issue like always-but sometimes a certain concept requires a certain expert.

I hope you’ve enjoyed the timely coverage and great writing found in these issues. If for some reason you haven’t, and you want the more traditional SLAM back, fear not. The Champs tribute issue with our beautiful Pictures of the Year feature will be on sale around July 10.