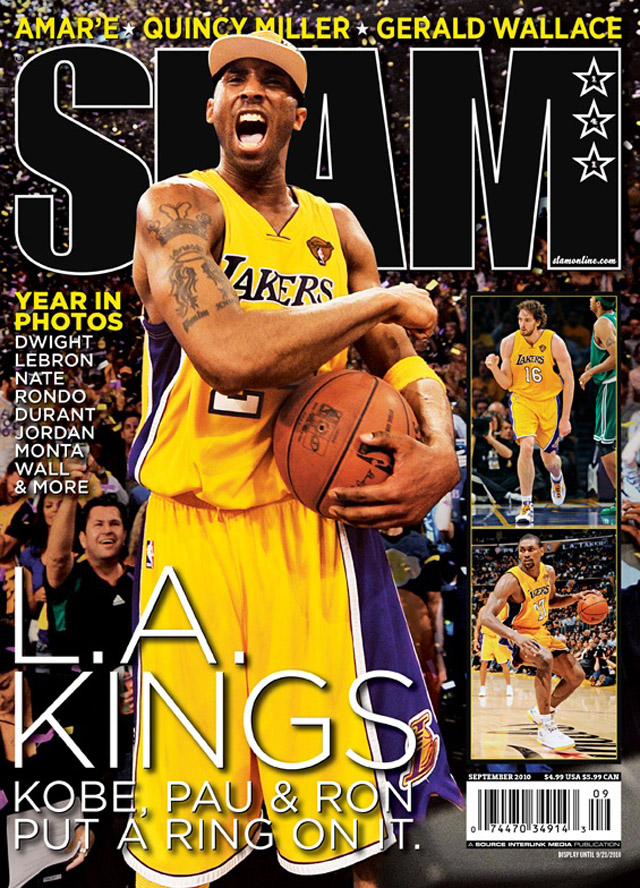 As the smoke slowly rose and came to a rest near the arena’s roof, I checked my Twitter. Not expecting to see anything new directed towards me, I was semi-surprised to find one unread message, courtesy of Ben Osborne.

No offense to the E-I-C, but he was wrong.

I didn’t have goose bumps “now”. Three hours earlier, when I sat courtside to watch Ray Allen warmup, I had goose bumps.

No, the goose bumps were long gone. But now, moments before Game 3 of the 2010 NBA Finals, despite my customary sweatpants and hoody, I was shivering. Despite my laidback attitude, my heart was racing faster than a 100 Meter sprinter. Despite a seat high above the raucous crowd, my ears were ringing louder than a thousand school bells. Despite my need to run SLAM’s liveblog, my hands were shaking incessantly.

I took a deep breath, filling my lungs with Garden air.

I looked to my left—Ben Collins was also surveying the scene. I looked to my right—another reporter was pounding at his keyboard with malice. I looked down—Kendrick Perkins and Andrew Bynum were circling center court, getting ready for the opening tap. Finally, I looked at my 13’’computer screen. Due to the lighting, I was greeted by my own reflection. A grin wider than Kevin Durant’s wingspan was staring back at me. And why not?

Between Trash Talk, Twitter, Facebook and comments on the site, those of us in the SLAM Dome get a feel for what our loyal readers like and dislike.

One topic of discussion the past few years is SLAM Magazine covers. Specifically, a nice portion of our readership think we bless Kobe Bryant and LeBron James with too much cover love.  We don’t need to explain ourselves—though we often do in the comments section—but this time we will.

I told Marcel that I always think of the issue of SLAM that drops after the Finals almost like a yearbook. By the time the issue is on newsstands, it’s been almost a month since the Finals ended. Not only is the season always over, but the Draft has happened and summer league is in full swing. But this is what we do. SLAM started putting Finals winners on the cover back in 1997 (issue 20 — Scottie Pippen), and after a few years off, we’ve done it every year since the summer of 2000 with SLAM 45 (featuring the Victorious B.I.G.).

Since we’re obviously not breaking any news by having the winner of the Finals on the cover, I’ve always looked at this issue as a keepsake, something hoops fans can cop and hold on to and then look back on, years later, to remember which Finals game went to overtime or which game it was that Kobe made that weird face where he stuck his jaw out (all of the games!).

With our mission clearly defined, putting together this cover has become about highlighting the story of the Finals.

So, yes, Kobe Bryant is on the cover again (!), but if you’re an NBA fan, there’s no arguing this one—especially since Pau Gasol and Ron Artest, two of the most important players in the Finals, also grace the cover.

OK, so 141’s got the Lakers on the cover and lots of NBA Finals coverage in it, but it also has plenty of other worthwhile content.

There weren’t too many bright spots for the New Jersey Nets last year, but the improvement of Terrence Williams down the stretch was certainly one of them. We got ink on of one of Seattle’s most inked players (I see you, Tiny Nate!). Late-season improvement equaling SLAM pages means Jrue Holiday and George Hill get some shine in this issue, too.

I’m excited to say, and I’m sure SLAMonline regulars are excited to hear, we also have an AppleSon production. Speaking of SLAMonline regulars, BETCATS, does Gerald Wallace’s name splashed across the cover make up for a slight lack of Charlotte coverage over the past few years (not that they deserved it)? Does knowing it’s a full feature make up for Charlotte’s ragged summer league play?

In terms of the soon-to-be and the already-was, we introduce our newest High School diarist, Quincy Miller, and we remind you about a cat named Schea Cotton, the original LeBron James.

Last but far from least, we present Dome Shots 2010. SLAM’s year in photos is always nice, but this year we outdid ourselves. Look for fresh pictures that recap the year in basketball in a way that can’t be done online.

And all of the above is just a piece of the cake known as SLAM 141.

I covered some amazing games and events this year. I had some no-holds barred sit-downs with some of the games stars. I traveled the country to watch basketball games and meet basketball players. Yeah, I did plenty of things this NBA season that I never thought I’d get to do.

And none moved me more than my first NBA Finals game.

Just flipping through this issue, I suffer residual goose bumps.

If y’all enjoy it half as much, we did our job.