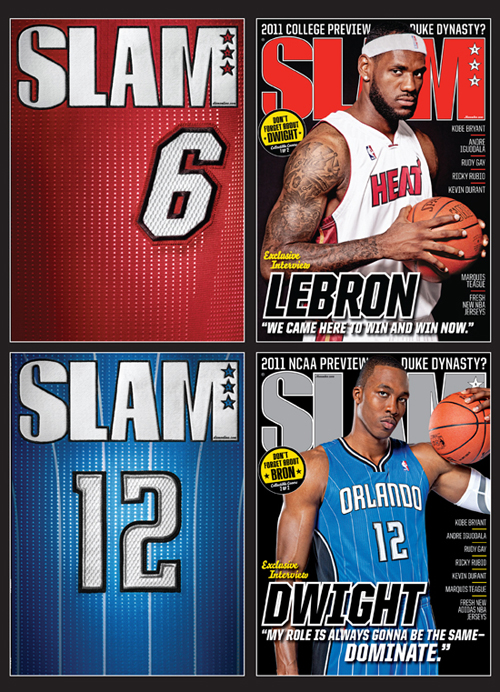 Finally! After a long summer filled with special issues in our office and a lot of free agency-induced chaos in the NBA at large, the new season is almost upon us…as is the latest issue of SLAM!

Given that he was by far the biggest story of the summer, you knew we had to put LeBron James on this cover. And in a nod to one of our biggest advertisers (more on them in a minute), and the fact that King James’ biggest comp for a Finals berth may well be his Heat’s closest geographic rival, we put Dwight Howard on one as well. The Battle for Florida, if you will.

Forget the Heat for a second; the Magic haven’t even gotten the same hype this offseason as the Celtics (or respect; I was a bit surprised by the voting in yesterday’s Polladaday). But that doesn’t mean they won’t be a worthy challenger. Orlando is coming off a 59-win season and is just 15 months removed from playing in the Finals.

While LeBron is the one who famously said he wants to be a “global icon,” Magic leader Howard is the one who spent this offseason traveling the world, spending time in China and India and readying for a trip to Haiti as we went to press, as well as working on commericals and a movie. Dwight has been so busy, in fact, that some fans wonder if he’s doing all he can to get better as a player. Well, in a great interview by our man Aggrey Sam, Dwight says that he can indeed do it all.

As for LeBron, we were thrilled to speak with him in August when he was otherwise on a media blackout. You probably read parts of Lang Whitaker’s interview with LeBron here, but there’s even more in print.

Now, the “New Era” I put in the headline to this story doesn’t just reflect the new season—it’s also speaking about the magazine industry. The pictures you see of the issue show what you’ll see on the newsstand (the uniforms) and what you’ll see underneath (portraits of LeBron and Dwight). Let me be blunt: if a big-time company like adidas wants to pay SLAM to wrap our cover to advertise their new “Rev 30” uniforms, we’re going to welcome it. For one thing, the “ads” couldn’t be more relevant to our subject matter: In case you haven’t heard, adidas is making all-new on-court uniforms for all 30 teams this season that are lighter and sleeker than NBA uniforms have ever been. We have a story in this issue about the uniforms, and we’ll be covering their unveiling at the NBA Store next Wednesday.

And in this era when all printed magazines are struggling to maintain financially, it’s frankly an honor to have adidas want to take over our front page. I’ve been told both covers will be at every newsstand in equal numbers, in the US and overseas, while subscribers will get theirs at random. We obviously welcome any hardcore fans to buy ’em both!

Besides the cover subjects and the uniform story, we also have stories on Rudy Gay and Paul George, sick posters and a dunk from the summer’s international action, and a back-to-school College Preview package that includes looks at the top men’s and women’s teams in the country as well as features on Skylar Diggins, the Georgetown Men’s Program, and an old-school on Hedake Smith, which is very intense. Plus much more.

In short, it’s another terrific issue, with two great covers and an unprecedented cover wrap (for us, at least) that should only help the SLAM brand. Look for it this weekend in New York City and elsewhere in the country next week.