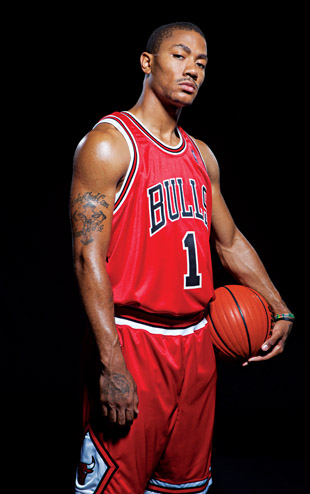 If you think about it, there aren’t many better stories in the NBA than Derrick Rose’s. Kid comes up in Chicago, anointed a future NBA star by the time he’s 15, leads the city’s most-storied high school program to state- and nation-wide acclaim, takes his college team to the national championship game as a freshman, and then gets picked first—by his hometown Bulls—in the Draft. Derrick’s dream has continued right into the L, as he’s put up two great seasons and has set his sights on “best player in the game” status. It’s more than enough to warrant putting this exciting young player on the first SLAM cover he has all to himself. Big thanks to adidas for getting us time with Derrick, Atiba Jefferson for getting some great portraits, and Aggrey Sam (going for “best young reporter in the game” status) for knocking out a really good story. Aggrey’s got some nice background on his personal history with Derrick below, but for the full DRose piece—not to mention Lang Whitaker’s NBA Preview, Tzvi Twersky’s Old School feature on Mitch Richmond and so much more—you’ll have to pick this issue up on newsstands beginning today…—Ben Osborne

You know how investors talk about “getting in on the ground floor” on something that’s about to get big? That’s how I feel about covering Derrick Rose.

No, I wasn’t hip to his potential brilliance as early as some folks—his talents were known to some South Side hoops aficionados as early as his middle-school days at Beasley Academic Center—but considering my background in reporting high school hoops (know how I know I’ve been around too long? When I see John Wall at the Bulls-Wiz preseason game and I can tell people “back in the day” stories), I don’t feel like I’m behind the curve.

But to be honest, the first time I watched “Poohdini” play in person, I came away disappointed. It was at Chicago State, during the annual CPS Holiday Tournament in early ’07. Rose’s top-ranked Simeon squad faced off with relatively unheralded Farragut (the alma mater of KG and Ronnie Fields did have former Oregon center Mike Dunigan, then a junior) before an SRO crowd in what was supposed to be a cake matchup.

Instead, Farragut pulled off the upset and Rose looked shockingly mortal in defeat, although he showed a few flashes of the highlight-reel ability that had earned him so much acclaim. Still, while I was extremely impressed with the Chi’s prep scene, I thought Rose might be a tad overrated (although I quickly changed my tune) and benefited from killing on the summer circuit, where his athleticism made up for whatever else lacked in his game.

Fast forward to about three years later, when I first took the gig covering Rose’s Bulls for Comcast SportsNet Chicago. His exploits at Memphis, ROY season and role in Chicago’s classic first-round duel with Boston have me sold that the kid is for real by now.

I’m assigned a SLAM China (I know, I didn’t know that even existed or was a separate publication before the assignment myself) cover story on Derrick, who I’m just starting to get to know. The team’s top-notch PR staff doesn’t know me that well at this point, so it’s not a major concern and after a couple days of patiently biding my time, the deadline is approaching.

I figure if I low-key the situation (Derrick’s already aware that I need an interview) in the locker room after a game, I can get it done quick and smooth. I get about five minutes in of my one-on-one before other reporters come through, asking about the game (nothing is more awkward than asking feature-type questions when beat writers are on deadline, as I now see both sides of the coin), something I also need to do.

I wait them out, tell Derrick thanks and if he has time, he can feel free to hit me from the road, since I hadn’t yet started traveling. Although he vows to call me from the team hotel, I resign myself to the fact that I’ll have to actually write something, rather than the requested Q&A.

The next day comes and after answering an unfamiliar number with a Chicago area code that comes across my phone, I’m greeted with: “What up, this is D. Rose.” How many cats—remember, this is a notoriously shy 21-year-old NBA star dealing with the demands and expectations with playing in his hoops-crazed hometown—would call a virtual stranger for a piece they won’t even be able to read (nor could I; after all, it was in Chinese), prompting from the PR department or not? To say a handful would be generous.

And that’s why I don’t mind the supposed-to-be 45-minute daily treks to and from the Berto Center or staying at arenas until after midnight with a 6 a.m. flight ahead of me—you know, the glamorous parts of this job. Not that dealing with any of the Bulls in particular is a hassle, but dealing when the face of the franchise treats everybody with the same level of respect, is genuinely humble, works diligently to get better every day, has a burning desire to win and is obviously outrageously talented—even if I was skeptical way back when—it makes my job that much easier.

So when assigned to write this piece—I interviewed him sporadically over the past few months, in L.A. back in June all the way through training camp—I wanted to capture Derrick’s growth into a leader, development as a player, fierce determination and tireless work ethic, but most importantly, his humility. I don’t see him changing his ways any time soon, but I hope readers get a little taste of what I’m privy to on a daily basis by being on the ground floor for the evolution of a superstar.