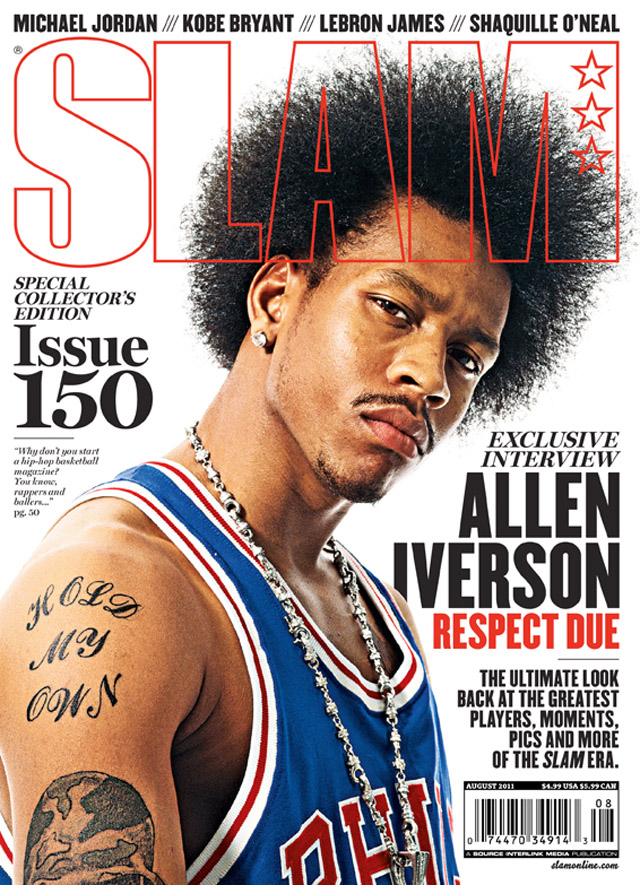 For our 150th issue, a milestone by any magazine measure, we discussed a slew of big names—current and retired—but ultimately elected to feature Allen Iverson on the cover.

Past. Over the course of our first 17 years and 150 issues, Allen Iverson was inarguably one of the best and most entertaining players in the League. From his 24,368 points to his 5,624 assists, Iverson demanded double-teams—and fans’ attention. And while, sadly, the internet has boiled him down to simply a practice parody, we still remember the fully formed Allen Iverson. The bundle of emotion, energy and highlights. For all of that, respect due.

Present. Take a look around the 2011 NBA Playoffs. From the exposed tats, to the hairstyles, to the unfettered emotional outbursts, to the ways players carry themselves, it’s clear that Allen Iverson’s influence still permeates the League. Heck, it’d be fair to say that during SLAM’s lifetime, no player has had a greater influence on the game and its surrounding culture than Iverson. The youngest of fans may not know this, but AI birthed a generation of clones—many of whom now populate the NBA.  For all of that—for LeBron and Derrick and Dwyane—respect due.

Future. For all of his college and NBA life, we’ve provided Allen with a platform to tell his tale. Now, just because the ball’s temporarily stopped bouncing doesn’t mean we’ve confiscated the microphone, taken the podium and turned the lights off on him. We’re still riding with the Answer. Maybe now more than ever, we want to know what Iverson is up to. What rumors are bogus, and what the truth is. What he’s currently doing, and what he plans for the future. So we hit Iverson up for one more conversation…and he obliged, providing us with one of the realest Q+As he’s ever sat down for. For all of that, respect due.

As for the cover itself, fab. If you’ve got beef with it, stick to the burger business. At 150 issues deep, our covers are still the baddest and boldest on newsstands, and they’re only getting better. As always, all praise due to Dennis, Ben, Melissa and Susan for conceptualizing, debating, executing and fine-tuning.

Deciding on Allen and designing the cover were relatively easy when compared with actually getting up with the Answer. A chance meeting at a Playoff game in Boston, hella phone conversations and innumerable texts with Gary Moore finally brought it to fruition. Props to him and his whole team at Moore Management and Entertainment LLC for their full support. We see what you’re building over there.

Luckily for us, the rest of this special keepsake issue was a little easier to put together. Luckily for you, “easy” in this case equals dope. Between features on Jamal Crawford and the Memphis Grizzlies, the first 150 point game in history and the 1991 Chicago Bulls, we’ve got pages upon pages of goodness. Throw in a timely poster, 150 of SLAM’s best memories and a dash of the usual college and high school coverage, and No. 150 turned out even better than we could’ve expected.

Look for this issue on newsstands next week (we dropped it today, a few days early, in honor of AI’s 36th born day), and look for Iverson to begin the official, public portion of his NBA comeback July 16 in Greensboro, at Camp Crossover’s celebrity game.

Jokes on you, we still alive. Thanks for sticking with us, fam.