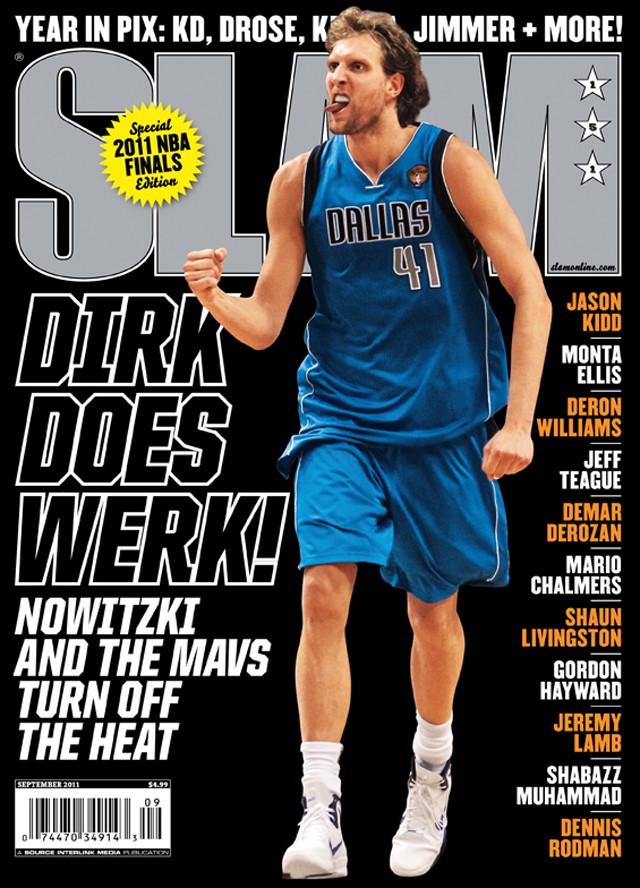 There’s a stupid cliché that I think goes “Everything’s bigger in Texas,” though it might be “Everything in Texas is big” or “Texas is really big” or something like that. I have no idea if it’s actually true; I’ve only been to Texas once. But I do know that during that one time—when I visited Dallas for the Finals’ Game 3-Game 5 stretch last month—everything I encountered was pretty damn massive. The first place I found myself upon arrival was the Hilton Anatole, a hotel so gigantic that a guy with a poor sense of direction could easily get lost in. Happened to me three times. That first day.

Then, I was off to the stadium. The American Airlines Center is a relatively large building, but with so much going on, with every nook and cranny already buzzing multiple hours before the game tipped off—writers slamming on their keyboards in all of the many media-designated spaces, the arena crew working hard as ever to prepare both the court and facilities, fans arriving extra early to hold signs and yelp for players’ attention, members of both teams going through pre-game routines that border on religious rituals—the place felt colossal.

Then, of course, the main event. And not only that one, but every one thereafter—Games 4 and 5, too, and though I wasn’t present for it, I’m sure 6 in Miami was similar. After the year the NBA had experienced—a free agency session that single-handedly changed the future of the League; the Decision; the premature celebrations; the ups and downs of a rollercoaster regular season; the Playoffs; the upsets; the blowouts; everything—the fact that it was all coming to an end that week made it feel like I was witnessing something extremely important. I was, in the sense that at least a half dozen squads had a legitimate opportunity to win a Championship this year (which is pretty rare), but only one would (obviously), and it was about to finally happen; I wasn’t, in the sense that it’s just another NBA Finals, and there’ll be another one next year, and another one the year after that, and so forth. Well, maybe not. Shit. More on that in a sec.

With it all in perspective, I realize a lot of the extra hype was probably self-generated—my rookie wide-eyed perspective at work. It was my first Finals experience, and I apologize for the hyperbole, but it really was every bit as ridiculous and amazing and absurd and hilarious and exciting as you could imagine it’d be, assuming you care about basketball even a little. You know how the series unfolded, so there’s no breaking news here, but what the Mavs accomplished was truly special, and if you do consider yourself a fan of the game—which is likely why you’re all here; well, except for one of you; hey mom!—you’re going to love this issue.

There’s no way around this: It’s a strange time to be an NBA fan. On one hand, the League is filled with more talent—both in its prime, and up-and-coming—than it’s had in, I don’t know, ever? And these last nine or so months…just, wow. I really don’t think I can run down all that was great about the 2010-11 season; I’d be writing this post for weeks and weeks, and nobody would ever see SLAM 151’s cover beyond those who worked on it. There was just too much—too many cool moments for a single video mix, too many stars for a single All-Star Game (I see you, LaMarcus), too many storylines for a single conversation. For a while now, every time I find myself catching up with friends who share a mutual love for hoops, the beginning of the NBA talk often means the permanent end of the anything-else talk. Not a coincidence.

And on the other hand, here we are, up to our ankles in the first lockout since ’98-99. If some are to be believed, we’ll be neck deep in this thing come October, and we—the fans, that is, who SLAM has and always will rep—will be gasping for air by January. Regardless, we’re coming off a June that won’t be forgotten anytime soon, and this issue is here to celebrate just that.

Dim future or not, ’10-11 has given us more than enough material to both think and write about since it came to a close a couple weeks back. That’ll be obvious when you flip through this ish, which contains recaps of each of the six Finals contests, along with a stunning selection of Domeshots in our annual Year in Photos. And of course, there’s plenty more: full-length features on Jason Kidd and Deron Williams; an in-depth look at the tragic death of Lorenzen Wright; a dope Old School on soon-to-be Hall-of-Famer Dennis Rodman; a new high school diarist and lots of other great stuff.

Oh, and you should’ve been able to guess who we were gonna put up front. Come on. Dude did it really, really big this past June. Talk about representing.