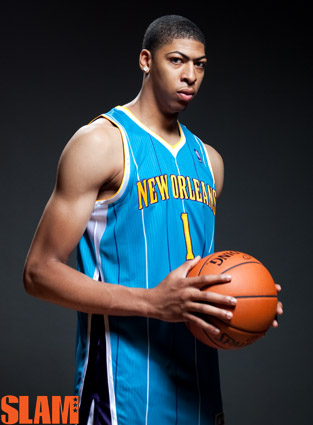 Sometimes, you have to swing for the fences. About a month ago, when thinking of story ideas for SLAM, I sent Ben a very simple email asking if he’d thought about featuring Anthony Davis? Of course, I thought a story on college basketball’s latest clear-cut future franchise player was already in the works. As it turned out, they were trying to land the shot-blocking sensation for the cover, but there were roadblocks to getting it done since he had no agent at the time (and still doesn’t—making him the last big-time prospect in this year’s Draft not to). I replied that I had a way to get in touch with Davis, and right away, I got a phone call from Mr. Osborne:

From there, it was all about taking unorthodox channels to get to what would turn out to be one of our most coveted cover story subjects to date. At one point, I was to hear from Davis’ parents. After a long, worry-filled week of no response from the ‘rents, Ben and I began to get a tad bit nervous. The closing of the magazine was near and still, we didn’t have our cover subject locked in.

On about the last day we could set something up for this issue, I got a phone call from an unknown number. The area code was 312. Chicago. I snatched up the phone like it was a field mouse and I was a hawk swooping in for the kill. And wouldn’t you know it? It was Anthony himself, being gracious and understanding in helping us meet our deadline.

Now you have to understand, Davis is only 19, so when you’re betting everything on a 19-year-old’s word, without the benefit of an agent or handler, things can go off the rails in a flash because, to a man that age, things happen and they invariably do happen.

But like a smooth tactician on a hot streak in Vegas, we rolled the dice. I flew into Lexington the night before the scheduled shoot to get everything ready and woke up early to make the donuts.

As a writer who has covered sports and hip-hop extensively, I can tell you that celebrities are notoriously late to just about everything, especially photo shoots and interviews. In this game, there’s a whole lot of “hurry up and wait” before you wrap a shoot or interview.  That’s just the way it is. But right as the clock struck 9:30 a.m., which was our call time, in comes Ant. And this was the Friday before Memorial Day weekend to boot!

As our esteemed photographer Trevor Paulhus worked his magic, I observed Anthony. The thing that stood out to me was how humble he was. Here’s a kid who basically wore a Superman cape throughout the NCAA Tournament and actually saved Lois Lane and was a lock to go No. 1 in the 2012 NBA Draft and to look at him, you’d think he was just another kid on a college campus getting ready for the holiday weekend. And, there was no entourage. Just his buddy Will, who made sure Ant stayed on time for his flight to Oakland that afternoon.

Going into it, I knew all about Davis’ game-changing defense, fleet-footed athleticism and unshakeable poise, but that day, I saw something I hadn’t seen in a kid of his stature in a long time: appreciation. This kid really appreciates where he is in life. He appreciates the fact that he is on the cusp of his lifelong dream to be in the NBA. And after speaking to him and knowing what drives him, I understood why he never lost his cool when other teams tried to rattle him with hard fouls and other cheap tactics. I understood why, in the championship game, when he couldn’t buy a bucket, he locked in on defense, Windex’d the boards and secured Coach Cal’s first-ever National Championship. I understood this kid and I liked him. So much so, that when he dons a New Orleans Hornets uni next year, I’ll be cheering for him like a real Hornets fan with a beignet in one hand and a po’ boy in the other.

For my cover story on Davis, I just tried to keep it simple. I wanted to humanize him. Too often, reports on college kids are static and filled with stats or feats of strength on the parquet floor. What I wanted to do was delve into what makes this kid tick; what drives him; what it was like to sprout from 6-2 to 6-10 practically overnight and go from barely being on the radar to being the radar. With Anthony’s considerable help in the form of great answers to my questions, all that and more is in the ish.

Ed’s Note: Thanks for the perfect lead-in, Maurice. This was indeed a stressful but thrilling cover to pull off. And for all the people who asked after the first post how we did this shoot five days before the Lottery took place: We shot Anthony in gear from every single team in the Lottery. That, plus shooting him in Kentucky gear, took a good three hours, and as Maurice says, we are very grateful to Anthony for his time. All that said, an issue of SLAM is always much more than just a dope cover. What else is in this one? A feature on Kevin Garnett by the increasingly high-profile Lang Whitaker, an amazing Old School q+a with Tommy Heinsohn, a revealing piece on DeMarcus Cousins and all sorts of stuff to get you hyped for the summer season, including an extensive and photo-driven piece on the new film, Doin’ It In The Park. Start checking for the issue in New York today and in the rest of the country next week.—Ben Osborne