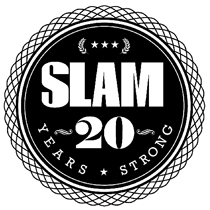 First, a note about the calendar. The first SLAM I or anyone else bought came out in early 1994. It didn’t even have a cover date on it. It was an experiment, really. It could have sold out in a week, or it could have languished on shelves for months, never to be printed again. There is zero exaggeration when I say a mag like SLAM had never existed before. The “’94” launch makes this special 20-year anniversary issue a smidge early. But here’s the thing: Dennis Page and friends built the magazine in ’93. The first Slamadamonth—soon to be displayed in a new section on this site with 169 others—happened in November, ’93. And, our good old-fashioned publishing calendar has always created a challenge for this issue that drops in June. All these factors combined to make us want to celebrate right now.

All those cats were fun as hell, and for much of the long NBA season, the unique skills and personalities that players like that possessed help make so many games worth watching. But people who think that SLAM is about style over substance are dead wrong. The three players who have been on the most covers in our history are Michael Jordan, Kobe Bryant and LeBron James. Why? Because they combined the style and flavor that entertains with the accomplishments—many of which happened in June—that makes their impact everlasting. They are the players who combined it all in the ultimate package. They are the players we had special illustrations commissioned of. And in many ways, they are why we are still here.

Besides reflections on how these cover subjects helped shape the history of SLAM and its readers, this very special issue includes quotes from dozens of other players who have been on the cover, a feature on the long path the aforementioned Telfair has taken, SLAM photographers’ favorite shots ever and so much more dope stuff.

Look for all three covers on newsstands this week, and be sure and stay locked to this site as well as our Twitter, Instagram and Facebook feeds for more anniversary goodies.

Related: A bunch of NBA players speak about their SLAM cover experiences.