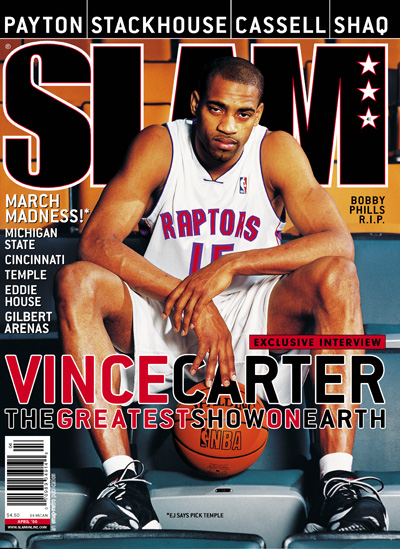 The 6th Man: Don Nelson stands in the middle of the Slam Dome, a black Sharpie in one hand, a cold can of MGD in the other. His shirttails are untucked, his face is bright red, and he’s scribbling frantically on a blue sheet of paper. Business as usual.

“Listen up, guys, here’s what we’re gonna do. I want the Gary Payton feature (page 48) over here”—he slashes a “2” on the baseline. “When the ball comes down, I want GP to cut out to here”—he sketches a curve to the top of the key—“and spot up for the open three.

“Then, I want the Sam Cassell feature (page 80) to bring the ball up to here”—he scrawls a “1” in a circle on the perimeter—“where he can dump the ball in to the Ralph Sampson feature (page 112) on the low blocks.”

“But what about—” Nellie cuts off the question before it’s even started, wiping sweat off his brow and taking a hit off the can. “The Vince Carter feature (page 64) is gonna set up over here,” he says, putting a “3” on the left side, opposite Sam I Am, “and will cut to the paint, around this pick set by the Jerry Stackhouse feature (page 54).” He throws a “4” down and curls a line around it. “Then the Cassell feature can either hit the Sampson feature for a post-up, the Payton feature for a three, or the Carter feature for an alley-oop. Or the Stackhouse feature can step out and hit the 15-footer. It’ll be just like when ’Nova beat Georgetown in ’85 (page 106)—I don’t expect anyone to miss. Got it?”

P.S. The above story is by no means true. However, the play shown is a real, authentic Don Nelson creation, fresh from the floor of the Continental Airlines Arena. And the story probably makes more sense than the actual play did.