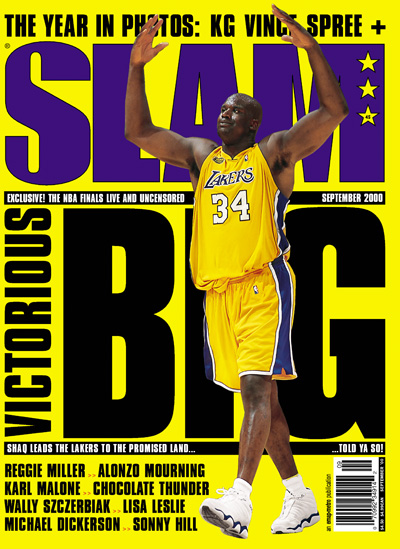 The 6th Man: It’s 1:08 in the morning on Monday, June 19. Game Six of the NBA Finals is in 20 hours or so, and there are tons of things that could be running through my mind. Like: Will Jalen and Reggie shoot like they did in Game Five? Or: Will Kobe play like Michael Jordan or Adonis Jordan this time? Or even: What’s up with Rick Fox? But no. The question that won’t go away is this: Is Sam Perkins really gonna retire?

Crazy, right? In a League where guys are superstars at 22 and whatever-happened-tos by 24, in a League where a player’s popularity is measured by his vertical, why worry about a 39-year-old forward who couldn’t jump over this page? In his 16 seasons, Perkins has never been an All-Star, never even averaged 17 points per. Still, there’s something. Watch him catch the pass and unfurl those impossibly-long arms in that smooth, lefty, money three-point stroke that barely lifts his Pumas off the floor. Watch him slip inside and beat out a taller, younger and more athletic opponent for a rebound. Beauty in simplicity. Big Smooth at his smoothest.

There’s more to it, though. He’s the last active member of the ’82 North Carolina championship squad (you know, MJ with 17 seconds from the corner), for one. There are the braids. And then there’s his whole vibe. Smooth is so cool he makes Shaft look like Pee Wee Herman. He’s so laid back sometimes you have to wonder if he’s really awake beneath those heavy-lidded eyes. Perfect example—Game Four, time ticking down. The ball gets kicked out to him on the right wing, and Smooth calmly plunges a game-tying three-point dagger into the Lakers’ hearts. Does he celebrate? Does he dance? Make an “S” with his arms? No, no and no. He just ambles back down to play defense, like it was just another shot in just another game. Oh yeah, one more thing—it was his birthday.

In the locker room, he’s the same way. One-point win or 30-point loss, down 3-1 or up 3-0, Sam is Sam. Cool, calm and collected. He doesn’t mean any disrespect, he just understands there’s no point in getting stressed. There’s no crying in basketball. Meanwhile, he just chills, dropping jewels constantly.

“You know there’s a time you just need to cool out,” he said during one Finals media session, in response to a question about his impending retirement. “Because if no one kicks you out, you’ll be here forever.”

Stick around, Smooth. The League’s more fun with you in it.